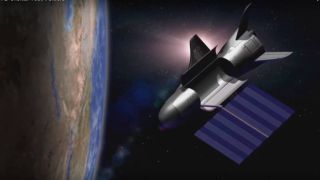 This mission — known as Orbital Test Vehicle (OTV-5) — was rocketed into Earth orbit on Sept. 7, 2017, atop a SpaceX Falcon 9 rocket from Launch Complex 39A at NASA's Kennedy Space Center in Florida.

Each X-37B/OTV mission has set a new flight-duration record for the program:

Most X-37B payloads and activities are classified. The only OTV-5 payload revealed to date by Air Force officials is the Advanced Structurally Embedded Thermal Spreader, or ASETS-II.

Developed by the U.S. Air Force Research Laboratory (AFRL), this cargo is testing experimental electronics and oscillating heat pipes for long-duration stints in the space environment. According to AFRL, the three primary science objectives are to measure the initial on-orbit thermal performance, to gauge long-duration thermal performance and to assess any lifetime degradation.

When the space plane will land is unknown. The last X-37B mission, OTV-4, touched down at the Shuttle Landing Facility at NASA's Kennedy Space Center in Florida on May 7, 2017 — a first for the program. All prior missions had ended with a tarmac touchdown at Vandenberg Air Force Base in California.

The next X-37B mission,B OTV-6, may lift off in 2019 aboard a United Launch Alliance Atlas-V (501) rocket. Launch would be from Cape Canaveral Air Force Station's Space Launch Complex-41.

The Air Force's X-37B "fleet" consists of two known reusable vehicles, both of which were built by Boeing at several locations in Southern California, including Huntington Beach, Seal Beach and El Segundo.

The program transitioned to the U.S. Air Force in 2004 after earlier funded research efforts by Boeing, NASA and the Defense Advanced Research Projects Agency.

The missions of the X-37B space planes are carried out under the auspices of the Air Force Rapid Capabilities Office, and mission control for OTV flights is handled by the 3rd Space Experimentation Squadron at Schriever Air Force Base in Colorado. This squadron oversees operations of the X-37B Orbital Test Vehicle.

This Schriever Air Force Base unit is billed as the Air Force Space Command's premier organization for space-based demonstrations, pathfinders and experiment testing. It gathers information on objects high above Earth and carries out other intelligence-gathering duties.

And that may be a signal as to what the robotic craft is doing — both looking down at Earth and upward.

Ted Molczan, a Toronto-based satellite analyst, told Inside Outer Space that OTV-5's orbit at the start of August was about 197 miles (317 kilometers) high, inclined 54.5 degrees to the equator. Its ground track repeated nearly every five days, after 78 revolutions.

"Maneuvers on August 18 and 21 raised its orbit by 45 miles (74 kilometers) which caused its ground track to exactly repeat every three days, after 46 revolutions. It was still in that orbit when last observed, on September 8, by Alberto Rango, from Rome, Italy," Molczan said.