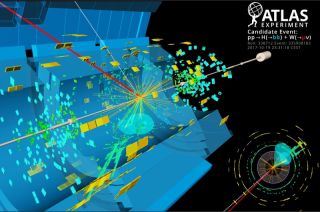 Six years after discovering the Higgs boson, physicists have observed how the particle decays — a monumental contribution to scientists' understanding of the Standard Model of particle physics and the universe at large, study researchers said.

In research presented yesterday (Aug. 28) at CERN, the ATLAS and CMS collaborations at the LHC at CERN say they have observed the Higgs boson decay into b quarks. The finding provides major support for the Standard Model, which has many implications for how we understand the world and the universe. "The Higgs boson is the least well-known and in many ways the most baffling particle in the standard model.  Observing its decay to bottom quarks is a major milestone in our understanding of its properties," Jessie Shelton, a high-energy particle physicist at the University of Illinois who was not involved in this research, said in an email to Space.com. [In Photos: Universe's Expansion Revealed by Quasars & Cosmic Lenses]

Higgs boson particles don't live very long. "You'll never hold a Higgs boson in your hand," James Beacham, an experimental high-energy particle physicist working with the ATLAS collaboration at the Large Hadron Collider (LHC) at CERN (the European Organization for Nuclear Research) in Switzerland, said to Space.com. But, although the Standard Model predicts what happens to the Higgs boson when it dies, until now, researchers hadn't observed the particle decay into b quarks, Beacham said.

Although observing the Higgs boson decay might not garner as much attention as the discovery of the particle itself, which was awarded the 2013 Nobel Prize in physics, it is a colossal victory, the researchers said. But the work didn't come easily. To create b quarks, physicists essentially smash protons together. A lot of background "noise" results from this process, and b quarks "are almost impossible to tease out from background" "fuzz," or sprays of lighter particles known as jets, Beacham said.

Additionally, ATLAS and CMS are separate detectors, so the collaborations working on each one must make and confirm these observations separately for it to "count."

The findings are another big step along the journey to better understand the Higgs boson and our universe. And each new discovery or observation, like the discovery of the Higgs boson, has the potential to give way to new questions and experiments. "First [you] discover the thing," Beacham said about the Higgs boson. "Then, you want to measure everything about it."

In confirming that this particle does, in fact, decay into b quarks, these physicists have shown that the Higgs field, the field behind Higgs boson particles described by Beacham as the "invisible jelly that permeates all of space," gives b quarks mass. The Higgs field uses the Higgs boson to interact with other particles, like the b quark, and give them mass.