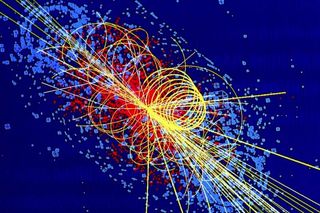 Simulation of a particle collision in which a Higgs boson is produced.
(Image: © Lucas Taylor/CMS)

Paul Sutter is an astrophysicist at The Ohio State University and the chief scientist at COSI science center. Sutter is also host of Ask a Spaceman, RealSpace and COSI Science Now. He contributed this article to Space.com's Expert Voices: Op-Ed & Insights.

Let's be perfectly honest. The Higgs boson and its role in the universe are not the easiest things to explain. It doesn't help that the Higgs has the horrible nickname of "the God Particle" and is often described as being "responsible for mass in the universe" or something like that.

The Higgs boson is indeed an important part of modern physics, but elevating it to the status of a deity seems a bit of a stretch, and the whole "making mass" thing isn't even this particle's most important job. [What Is the 'God Particle'? -- Higgs Boson Explained (Video)]

Oh, and physicists don't really care about the particle.

First, I want to talk about the particle's name. It has a perfectly acceptable name: the Higgs boson. Physicist Leon Lederman coined the nickname "God Particle" in the early '90s and used it as the title of his book on the subject. I'm sure he thought it was just a cute name (especially since Lederman claims his publisher rejected his original idea of the "Goddamn Particle"), but the media went crazy with the name, and now it's hard to disentangle the real physics of the Higgs from the hype.

The particle's real name, the Higgs boson, is actually quite informative. Indeed, it references two people, further highlighting the particle's importance: Peter Higgs, who with a bunch of colleagues first proposed the particle back in the 1960s, and Satyendra Nath Bose, who was a pioneering figure in the early days of particle physics.

"Boson" is the term for one of the two kinds of particles in the universe, with the other called a "fermion" (after Enrico Fermi). Very, very loosely, you can think of fermions as the building blocks of the everyday world. Think electrons, quarks, protons, neutrinos and all their friends. Meanwhile, the bosons are the forces between them: photons, gluons and so on.

So right there, the name gives you a hint: Because this particle is called a "boson," it must have something to do with forces.

But modern particle physics isn't really about the particles themselves, and that goes for the Higgs boson, too. No, in the contemporary view of the rules of the universe, the primary physical object is the field, an entity that permeates all of space and time. This field can take different values at different points in space-time, and each value corresponds to the average number of particles observers see in that patch. In this view (and indeed, in reality), particles can be created and destroyed at will, simply by adding or removing energy from the field.

In other words, you can slap a field and make some particles. A single particle is just the minimum possible amount of energy that a field can support. Every kind of particle that scientists know of, from the electron to a photon, is associated with its own space-time-filling vibrating field.

I'm spending a couple of paragraphs making this distinction clear because the hunt for the Higgs boson isn't about the particle itself. Machines like the Large Hadron Collider are trying to study the Higgs field, but the only way to do so is to make some Higgs particles (i.e., some slaps in the field) and see how they work.

Speaking of work: It's the Higgs field, not the Higgs particle, that's doing interesting things in the universe.

The "interesting thing" that the Higgs boson does in the universe relates to a fundamental question of modern physics. Physicists observe four forces of nature: electromagnetic, strong nuclear, weak nuclear and gravity. The photon carries the electromagnetic force, while the W+, W-and Z bosons carry the weak nuclear force and a set of gluons carries the strong nuclear force. And gravity is carried by … well, perhaps that's a subject for another day. [Greatest Mysteries: What Causes Gravity?]

These four forces of nature are, as you may have noticed, radically different from one another. It's nothing at all like the families of fermions: In that realm, a simple change of charge or different measure of mass will get you a new kind of particle. In the boson world, the electromagnetic force is completely different from the weak nuclear force in terms of mass, range, and interactions, and their respective force carriers aren't even on speaking terms, let alone related to each other.

But why? Really, why? Why are the forces of nature so dang different?

One clue to this perplexing mystery is that, at high enough energy densities — like, say, in the business end of a particle collider — there are only three forces of nature. You read that right: three, not four! There's strong nuclear, gravity, and a strange hybrid of electromagnetic and weak nuclear called, appropriately enough, the electroweak force.

This force appears only at high energies, and a quartet of massless particles carry it. Mathematically, these particles and their associated force are in a highly symmetric state. But at low (read: normal, everyday) energies, that unified symmetric force breaks apart to become the awkwardly-split-but-still-have-to-live-together electromagnetic force (carried by the still-massless photon) and weak nuclear force (carried by a much heavier trio of particles).

And the cause of the split is the good ol' Higgs (which you may have guessed, because that's the focus of this article).

At that high-energy, symmetric state, not only are there four massless carries of the electroweak force, but there are also four Higgs fields. The reason there are precisely four isn't that there's a rigged matching game; the same deep symmetries that lead to the electroweak unification also provide the mathematical machinery for constructing four Higgs fields. In other words, if you're going to propose the existence of a Higgs field at high energies, you don't get any choice but to construct four – it's baked into the fundamental symmetries of our universe.

I haven't seen anyone name these four high-energy Higgs fields "the higglets" yet, so I'll just go ahead and make that a thing.

But the fourth higglet gets "stuck" (again, for lack of a better term) in an asymmetrical state that prevents it from matching up with the remaining electroweak carrier. That carrier then gets to remain massless — and, aha, you get the photon, carrying the now-familiar electromagnetic force. [Video: What Makes the Higgs Boson Important?]

That fourth "stuck" higglet is left all alone, and that particle is what scientists mean when they say they're looking for the Higgs boson. By searching for that particle, and hence learning about its associated field, researchers can get a better understanding of something pretty simple but also remarkable: why the weak nuclear force is fundamentally different from the electromagnetic force.

But what about the relationship between the Higgs boson and mass? There is indeed a relationship, but probably not the one you think. And that story has to wait for another article.

Learn more by listening to the episode "Why Is the Higgs boson Important? (Part 1)" on the Ask a Spaceman podcast, available on iTunes and on the web at http://www.askaspaceman.com. Thanks to Jamie R., James S., @croftandi, Peter S. and Lorraine C. for the questions that led to this piece! Ask your own question on Twitter using #AskASpaceman or by following Paul @PaulMattSutter and facebook.com/PaulMattSutter.