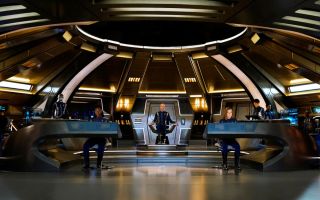 A view of the bridge during "Star Trek: Discovery" Season 1.
(Image: © Russ Martin/CBS)

"Star Trek" fans have been positively spoiled this week, there's no denying that.

Not only did Sir Patrick Stewart announce his return as Jean-Luc Picard in a brand-new "Trek" series for CBS -during the annual Las Vegas Official Star Trek Convention this past weekend, but at the same event it was announced that Season 1 of "Star Trek: Discovery," the latest entry in the franchise, would be available on Blu-ray and DVD in just a few months' time.

Now, CBS Home Entertainment has released the official trailer along with a list of special bonus material totaling more than 2 hours' worth. [Where Should 'Star Trek: Discovery' Boldly Go in Season 2?]

The trailer includes clips from the show along with behind-the-scenes featurettes in the four-disc set.

As we'd all hoped for, there are a multitude of extras on offer giving us an insight into the production of this new look and totally different "Star Trek" series. Here they are, as laid out in the release on StarTrek.com:

The "Star Trek" Theme — A discussion with executive producer Alex Kurtzman and composer Jeff Russo about creating the "Discovery" theme and score for the show.

Creature Comforts — A behind-the-scenes look at the makeup and prosthetics department on "Star Trek: Discovery," as they both modernize well-known "Star Trek" species like the Klingons, Vulcans and the Andorians and bring to life a new species, the Kelpiens.

Designing Discovery — Insight into the production design department led by Tamara Deverell as they create the planets, the world within those worlds and the starships to travel among them.

Creating Space — An exploration of how the VFX team, headed by Jason Zimmerman, pushes the envelope to create the reality of space, planets and starships for "Star Trek: Discovery."

Prop Me Up — Led by prop master Mario Moreira, a voyage through the world of "Discovery" props, providing an inside look at the design process from inception to set.

Feeding Frenzy — A fascinating look at the on-set food stylist who creates a galaxy of cuisine. (Mmmmm, Kelpian ganglia…and the sautéed Ceti eel we saw on Qo'noS.)

Dress for Success — Costume designer Gersha Phillips and her team create a spectacular array of clothing, uniforms and armor for every kind of species in the galaxy.

"Star Trek: Discovery," The Voyage of Season e1 — A look at the adventures and plot twists encountered in the first season by the crew of the USS Discovery.

In addition, the collection will include never-before-seen, deleted and extended scenes — everything a dedicated Trekkie could ask for.

"Star Trek: Discovery" Season One on Blu-ray and DVD can be preordered now and will be available on Nov. 13 — making it the perfect gift to ask Santa for.

The first season of "Star Trek: Discovery" is available on CBS All Access in the U.S. and Space Channel in Canada. It's available on Netflix in the rest of the world.

Season 2 is filming in Toronto and will premiere in January 2019.