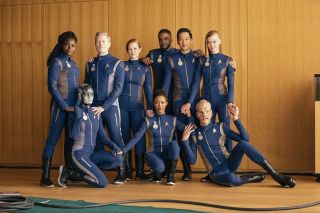 The crew of the Discovery poses after the Season 1 finale of "Star Trek: Discovery."
(Image: © Jan Thijs/CBS)

Warning: This article includes spoilers from the first season of "Star Trek: Discovery."

The new series "Star Trek: Discovery" wrapped up its first season last night (Feb. 11), bringing viewers down a twisted path that involved an alternate universe and several characters with bizarre pasts. Where can Season 2 go from here? It's hard to make firm predictions about next year's season, but here are some avenues the showrunners should explore.

There is no release date for Season 2 yet, but back in September, executive producer Alex Kurtzman told The Hollywood Reporter that he expects the season to begin no earlier than early 2019.

We've heard a lot this season about Michael Burnham (Sonequa Martin-Green) and the fact that she was raised by the parents of the famous Vulcan Spock, who has appeared in multiple "Star Trek" franchises. That makes Spock Burnham's adopted brother. We learned this season that their relationship caused at least one major conflict with their father, Sarek (James Frain). [Kirk or Picard? We Asked the 'Star Trek: Discovery' Stars Some Classic Questions]

Sarek chose to recommend Spock instead of Burnham for the Vulcan Expeditionary Group, which was a huge honor — but it worked out badly for both siblings. Burnham wanted to join the group and was shattered when she was told (falsely) that she didn't qualify. And Spock just rebelled against his dad and chose to go to Starfleet instead.

Let's bring Spock on-screen and see how he interacts with Burnham. We know from old original-series episodes that Spock and Sarek broke off communication for several years, but it would be interesting to better understand how this incident affected Spock's personal history — as well as Burnham's, of course. Given that the USS Enterprise, which is Spock's ship, and the USS Discovery are face-to-face at the end of the season finale, I hope the two crews will meet right away in Season 2. (In an interview with Variety, the showrunners also hinted that we'll learn more about Spock and Burnham's relationship.)

Don't forget about the Klingons

The season ended with the Klingon outcast L'Rell (Mary Chieffo), armed with a detonator that threatens the Klingon home world, convincing the 24 Klingon houses to unify and end their war with Starfleet. That's great for intergalactic peace, but unfortunately, those actions killed a very promising part of the plot that explored the conflict between Klingons and the Federation in Starfleet's early days.

One thing "Discovery" should address is the modification program that temporarily fused together Voq (a Klingon) and Ash Tyler (a human). The operation did not go well, and Voq was eventually excised from the hybrid. But this sounds suspiciously like the genetic-modification program involving humans that permanently changed the Klingons' appearance (as explained in "Star Trek: Enterprise," 2001-2005). I hope this is cleared up in Season 2, as we spent a lot of screen time exploring Voq, Tyler and how the plotline affected Burnham's relationship with Tyler.

The season started on a promising note as we looked at the tension between the Klingon houses. While L'Rell's actions appear to unify them, understanding more about the different factions would be great for fans of "Star Trek" history. Some possible avenues to explore: What were their points of difference? How did it affect relations with Starfleet? Why did the Klingons fundamentally distrust other species?

The spore drive and the alternate universe

One of the biggest innovations of "Discovery" was a classified spore drive that allowed a starship to jump instantly from place to place. There were so many subplots related to this: the alternate universe, the space whale in the funny time-loop episode, the aggressive tardigrade and, of course, the effect on Lt. Paul Stamets' (Anthony Rapp) health.

That list alone gives us a bunch of possible jumping-off points for Season 2 plots, but here's a more fundamental question. It appears the spore drive was abandoned at some point in its testing, because future "Star Trek" crews mainly have ships that travel using warp drive. Why? What is it about the spore drive that caused Starfleet to stop working on it, when it appears so handy for place-to-place transport?

We also can't forget that, theoretically, the crew could jump back to the alternate universe at any time (and that the alternate-universe Georgiou is wandering free in the "real universe" right now, with her xenophobic beliefs). We spent several episodes in that other universe, so expect some sort of mention of it in Season 2.