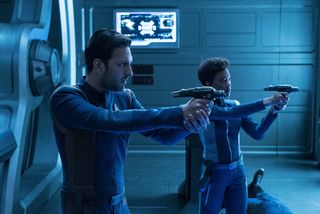 Time travel is what makes "Star Trek" tick; there are dozens of examples across all the series and movies, according to this "Memory Alpha" fan site. "Discovery" was bound to use this trope — and, smartly, the show employed its strongest guest actor to star in that key episode: Rainn Wilson, reprising the beloved character of Harry Mudd from an earlier episode of "Discovery."

Mudd has a special device that plays the same 30 minutes of the crew's lives over and over again. Before the plot explanation distracts us, let's just acknowledge that mad Mudd in a time loop is simply fantastic. His triumphant cries of glee include "There really are so many ways to blow up this ship — it's almost a design flaw!" and, when asking Capt. Gabriel Lorca (Jason Isaacs) how many times Mudd killed him in the time loop, "Fifty-three, but who's counting — it never gets old." [The Most Bizarre Aliens of "Star Trek"]

A whale of an episode

The time loop — one could call it "Gormagander Day" — generally goes like this: Crewmembers are in the middle of a party when Michael Burnham (Sonequa Martin-Green) and Shazad Latif (Ash Tyler) get called to the bridge. Turns out there's a "gormagander" (a sort of space whale, we're told) swimming by the ship that appears to be in medical distress.

An aside: If this "space whale" moniker is supposed to be a subtle tip to the space-traveling whales and alien-whale-calling spaceship in the hilarious time-travel movie "Star Trek IV: The Voyage Home" (1986), please give this scriptwriting team a lifelong supply of whatever nonalcoholic drink Vulcans enjoy.

Anyway. The USS Discovery has to beam this creature on board under provisions from Starfleet's Endangered Species Act. The readings on the gormagander are funky, and it's because Mudd — a rascally character who was unveiled to fans in "The Original Series" (1966-1969), and who appeared in Episode 5 of "Discovery" played by Wilson — is hiding inside, along with some equipment. In every time loop, he emerges in some fashion, takes control of Discovery, runs around the ship looking for the secrets to its spore drive to sell to the Klingons and then blows Discovery up when his 30-minute time window expires. [The 'Star Trek: Discovery' Cast Is Full of Trek Fans]

The humor in this situation was mostly solid, but the repetitive nature of the episode sometimes dragged down the pace. I've seen the famous time-loop movie "Groundhog Day" (1993) many times — no pun intended — and the scriptwriters there definitely kept the fresh factor higher within the repeating-story challenge.

But "Discovery" at least wisely borrows a page from this movie and includes a romantic challenge, which helps keep the show interesting. Turns out Burnham and Tyler are just about ready to admit their "like" for each other, but Burnham — being raised in Vulcan society — isn't a great one for subtlety. When her friend, Cadet Sylvia Tilly (Mary Wiseman), tries to hook up Tyler and Burnham at the party, Burnham keeps calling it "inappropriate," which doesn't go over well with Tyler. In later time loops, fortunately, she stops repeating that mistake.

The key to unlocking the time loop lies with Lt. Stamets (Anthony Rapp), who — as you may have picked up from the spore drive episodes earlier this season — has special tardigrade DNA embedded within him to help make the ultrafast transportation system beam Discovery quickly around the galaxy.

Mudd can't figure out that Stamets is the spore drive's secret, no matter how many times the villain blows up Discovery or makes witty comments about taking over the ship's systems. And Stamets' DNA modification means he exists outside of the time loop that Mudd created, so he can warn other crewmembers.

Naturally, it takes time for Stamets to convince the skeptical Burnham, and there's only 30 minutes in each loop for him to talk to her and for the crew to take action. But Stamets finds a way to get Burnham listening — we'll let you watch the episode to find out the details. With experience and practice, the crew finally confronts Mudd in plenty of time before the loop ends. [The Top 10 'Star Trek' Technologies]

You would think that after all this havoc and Mudd's many murders (even though those events are erased in each iteration of the time loop), the crew would want some sort of horrible vengeance.

But instead, they bring Mudd to the waiting arms of a woman, Stella Grimes, who he ran away from in his past. Grimes says she's just fine with Mudd's, uh, winning personality and many debts. And the Discovery crew lets Mudd go, as long as he stays with Grimes and out of the Federation's business. (Stella's dad is also involved in the transaction, but his paternalistic presence was pretty superfluous.) We don't get to hear what happened to the gormagander, but presumably, it's being held secure on board until it can heal and be dropped off somewhere safe.

Now, we're just one episode away from the midseason break. Burnham has a solid place on the USS Discovery, and as she points out in closing narration, her adventures have introduced her to a person — Tyler — that she never would have met before the mutiny. Finally, we're seeing some character growth! Just one episode left before the midseason break; stay tuned here to see how Episode 8 turns out.