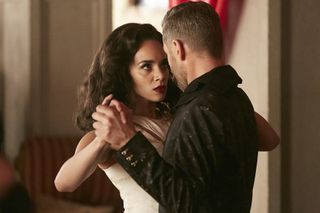 Killjoys Dutch, Johnny and D'avin have wandered far afield from their early space-bounty-hunter days — they've uncovered an otherworldly conspiracy, kicked off a system-spanning war and dealt with a whole lot of green goo since their adventures began.

And it's set to get even weirder in the "Killjoys" Season 4 premiere, which airs tonight (July 20) at 10 p.m. EDT/9 p.m. CDT on Syfy. Heading into the beginning of the story's end — the show was renewed last year for two final seasons — Dutch (played by Hannah John-Kamen) has temporarily teamed up with her nemesis to fight an ultimate evil, while brothers Johnny (Aaron Ashmore) and D'avin (Luke Macfarlane) fight to find her.

The beginning of this season also promises a look back into the early days of the Killjoys' partnership, when Dutch and Johnny were just getting to know each other and first make their way to the four-world system called the Quad. The stakes are higher and the world is even stranger now, but it's the duo's friendship that might (hopefully) save the galaxy. [Space.com Visited the 'Killjoys' Set: 6 Things We Learned]

Syfy released a (spoiler-filled and action-packed) first look at Season 4, embedded below: