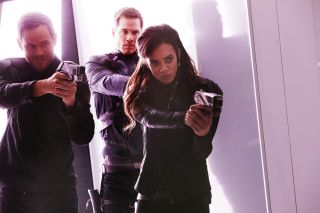 The news of the "Killjoys" renewal came just hours before the season's finale aired, and shortly after "Dark Matter" fans got their bad news, Maureen Lee Lenker reported for Entertainment Weekly.

"Helmed by [showrunner Michelle] Lovretta and driven by the superb storytelling, we are excited to bring 'Killjoys' back for two final seasons," Bill McGoldrick, executive vice president, scripted development, for NBCUniversal Cable Entertainment, said in a statement given to Entertainment Weekly.

The "game-changing season finale sets the tone for the final chapters of our bounty hunter's space adventures and we cannot wait for our talented cast and crew to bring to life what is sure to be an epic journey that will leave our passionate fans on the edge of their seats,"McGoldrick added.

As for "Dark Matter," the show's showrunner, Joseph Mallozzi, and fans are pushing for the series to be picked up by Netflix for additional seasons. The series' first two seasons are currently available on the streaming service.