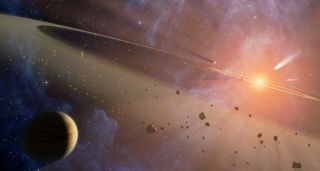 An artist's depiction of a giant young planet like beta Pictoris b orbiting its star.
(Image: © NASA/JPL-Caltech)

The exoplanets that scientists have identified so far are a pretty eclectic bunch — which is why astronomers were surprised when they realized that a newly spotted planet looked awfully familiar.

The newfound planet and its apparent twin were both discovered by direct imaging, a tricky method that has, until now, identified only very distinctive worlds. So, when the newly discovered "doppelganger" planet, called 2MASS 0249 c, appeared, with the same size, brightness and spectral features as a well-known planet called beta Pictoris b, scientists wanted to figure out what connection the two worlds might have.

And that's where the picture gets even more complicated, because the team's investigations, published in a new paper, suggest the planets were born in the same neighborhood but by very different processes.

"To date, exoplanets found by direct imaging have basically been individuals, each distinct from the other in their appearance and age," Michael Liu, an astronomer at the University of Hawaii and co-author of the new research, said in a statement. "Finding two exoplanets with almost identical appearances and yet having formed so differently opens a new window for understanding these objects."

Scientists have now pieced together a picture for these two seemingly identical planets. Beta Pictoris b's birth seems to have been run-of-the-mill for a gas giant. This planet formed near a star 10 times brighter than our sun at about the distance of Saturn from our sun, and it formed by grabbing gas from its star's disk and clumping that material around a rocky heart.

But 2MASS 0249 c's birth played out very differently. It orbits two small, faint brown dwarfs at a distance about 2,000 times that from the Earth to the sun. Those brown dwarfs, unlike beta Pictoris, weren't surrounded by much gas or dust, so their new planet couldn't have formed by vacuuming up the stellar disk.

Instead, it "looks like an underweight brown dwarf that formed from the collapse of a gas cloud," University of Arizona astronomer and study co-author Kaitlin Kratter said in the statement. "They're both considered exoplanets, but 2MASS 0249 c illustrates that such a simple classification can obscure a complicated reality."

The research is described in a new paper accepted for publication in The Astronomical Journal and posted to the preprint website arXiv.org.

The team said it hopes that 2MASS 0249 c's huge distance from its faint host stars could make the planet easier to study, because it won't be blotted out by the enormous amount of light coming from a nearby star.