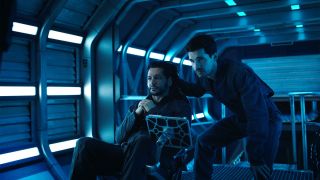 Alex Kamal, played by Cas Anvar (seated) with Stephen Strait as James Holden on board the Rocinante in Episode 4 of "The Expanse" Season 3.
(Image: © Syfy)

In Season 3 of Syfy's "The Expanse," the crew of the Rocinante are stuck amidst Earth, Mars, the asteroid belt, and a mysterious and dangerous "protomolecule" whose true purpose is unclear.

Space.com caught up with Cas Anvar, who plays the Rocinante's pilot, Alex Kamal. One of the most enthusiastic actors we've ever interviewed from a show, Anvar talked about training with astronauts to film zero-gravity scenes, the science of "The Expanse" and some big shifts to expect for the rest of the season.

Space.com: How are you feeling about this season so far?

Cas Anvar: Actually, I'm feeling amazing. Season 3 is exceeding all of our expectations, and our expectations were high. The actors were wondering how the hell are we going to surpass Season 2, which ended up ending with a real big bang and got great reviews, and fan interaction was amazing. So, we were kind of stressed out, like how do we top that? And the writers just went to town on it, and they actually had even less time to prepare Season 3 than they did for Season 2.

Our premier episode, after making fans wait close to nine months or a year, they still came in like gangbusters, and we delivered and people were happy. The good news is Season 3 is like a runaway locomotive. It just keeps building and building and building like an escalating ski slope. So, if we got 100 percent [on the film rating site Rotten Tomatoes] on the first episode, what the hell's going to happen when we get to the finale?

Space.com: What is it about "The Expanse" that makes it so special?

Anvar: It is a very unique show. I personally feel that it's one of the best sci-fi shows ever to hit the television. First and foremost, we're blessed with an incredible creative team. We've got some of the top writers, producers, creative people in the industry. Our showrunner is from "CSI," "Star Trek: The Next Generation," "Farscape." Our writers who wrote the pilot episode and are still in the writing room with us writing episodes every year are the guys who wrote [the film] "Children of Men" and [the first] "Iron Man." Our other writers, who are the creators of the series [and the books], Ty Franck and Daniel Abraham, who are collectively James S.A. Corey, they are in the writing rooms making sure that the books get transferred authentically and honoring the books as they get transferred to the TV.

In some ways, they're actually really excited to do the transfer, because they're feeling like, after they've written them, they're 5- or 6-year-old books, and they have this — there are certain things we wish we had done which we didn't get done in the book, and now we're getting a second kick at the can by putting them on screen. All the things we wanted to do, now we can do. So, in some ways, the television show exceeds the novels, which are huge hits themselves … the adaptation, in many ways, allows the novels to go to a new level, because they're getting to deepen them, enrich them. They're getting more textured, more involved. That creative team is a huge part of why it's such a success.

And we have an amazing cast that's delivering this. We have A-list film actors. We've got an Oscar-nominated, Emmy-Award-winning actress playing Avasarala, Shohreh Aghdashloo. We've got Thomas Jane, who's done all these different things and comes to the table with a huge body of work, and myself, Steven Strait, Wes Chatham, Dominique Tipper, and then all of our guest stars, in and of themselves, are leads. This year, we've got David Strathairn, Elizabeth Mitchell, Jared Harris. These are all people who carry shows themselves, and they're our supporting cast. So, you have an incredible body and pool of talent that we're putting to work on an amazingly integrated, intelligent and well-thought-out script. ['Expanse' Sci-Fi Book Series Nears End with 'Persepolis Rising']

Space.com: And you've mentioned fans really love the way the show does science.

Anvar: We are probably the most accurate show, scientifically, on television. And we go to great pains to make sure every single thing we show on the show is scientifically accurate. There are a couple of little items that we have taken creative license for, but even those are based in science. Like the Epstein drive is a drive that theoretically is possible but has not been invented yet. That allows us to travel at one-tenth the speed of light and provide perpetual acceleration. It's theoretical. It's just we don't have the technology up for it. And the [invented] juice that we inject ourselves with so that we don't get killed when we go at high-G speeds, that keeps us from having heart attacks.

Everything else is represented accurately. And to our great delight, the fans love the science. They love the accuracy. They love that we don't have artificial gravity, force fields, laser blasters, disruptors and photon torpedoes and all that stuff. All of that stuff is kind of what science fiction has had to do because they've taken away the real, authentic danger of space. In "The Expanse," space is a character in the show. Space is trying to kill you 24 hours a day, and it's hugely dangerous, it's hugely problematic to travel, it's incredibly volatile and unpredictable. You've got radiation, you've got no atmosphere, you've got no gravity. All this stuff is trying to kill you, and we keep that danger and that challenge in the show, and for some wonderful reason, the audiences love it. We don't then have to embellish with augmented reality in order to provide jeopardy and suspense. We just — this person has a crack in their helmet, and they're about to die … or you're not strapped in during a high-G dogfight. You're about to get turned into hamburger against the sides of the ship because you're not strapped in.

That's never, never been shown, ever, in any space show I've ever seen — you've never seen people get smashed around the ship because they're not strapped in. You've never seen a person on their main ship in a spacesuit because they've had to vent all the oxygen, because if they get shot with a PDC rail gun, the bullet's going to go right through the ship and all the oxygen's going to be vented. Your ship might explode because of the pressure, and you're going to die of asphyxiation, so you've got to do a spaceship battle in a spacesuit just in case. These are all little unexpected gems that have come out of us choosing to do the show this way.

Space.com: How has it been to settle into the character of Alex over these three seasons?

Anvar: Alex has got to be one of my favorite roles I've ever got to play. He's just such an incredibly rich and authentic character, and I really love him. I identify with him a lot. Alex and I share a lot in common. We're both really kind of introverted and laid back and keep to ourselves, and we both try to use humor to get out of sticky situations. He doesn't really contribute unless he's asked. He sits back and watches, and when stuff gets hairy, he tries to crack jokes to alleviate the tension. … He's a little bit older than the rest of them. He's lived a little bit longer [and learned] you don't sweat the big stuff, and sometimes you've got to pick your battles. Sometimes, there's nothing you can do, so why get stressed out about it? You may as well just crack a joke and just try and get it done.

Out of everybody on the ship, in some ways, he's the most human. And by that, I mean he's identifiable — the audience can identify with him the easiest. His backstory is not this huge backstory of demons and trauma and terrorism and abuse. It's not this superhero origin, which most of our other team members are. His backstory is he's a family man, he's a military man, he's a human being, he's a Martian who is desperately trying to figure out who he is and what his place is in the world. He's a failure at being a father, he's a failure at being a husband, he's a failure at being a Martian. And there's something gnawing at him that he's never realized, and he's never believed in himself, and he's never been believed in, and everyone's always underestimated him. … Then, Season 3, he's grown so much, he's discovered so much of who he is, that he finally finds the courage to face himself in the mirror, look at his failures, look at the things that he disappointed people on, and take responsibility for the choices he's made.

Space.com: Have you and the rest of the cast gotten used to filming zero-gravity scenes?

Anvar: We keep training every year. Every year they bring out specialists. We get astronauts in there … people who have actually lived in zero G, to teach us how to move, what's authentic, what's real. We're becoming more experienced. Our physical vocabulary is becoming more comfortable. However, we're also learning ways to dodge it. Every time we're told, "OK, this is a zero-gravity scene," Steven Strait will find himself near a vertical bar or a chair that he can grab onto, or he will cross his arms so he doesn't have to do what we've been calling floaty arms, because we all hate that. It is hateful to have to do the floaty arms thing, because that is kind of realistically what would happen — your arms would float unless you're engaging them and doing something with them. They don't hang by your side. Most of us, we try to find something to hold onto or grab, do something with our arms crossed.

Wirework will never be easy. Wirework is always painful and awkward and difficult, but we're getting experienced at it. We're getting better at it, so it's becoming a little more fun, and it looks cool as hell on screen. We love doing that.

Space.com: Anything else people should know about Season 3?

Anvar: I'll tell you that Season 3 is going to take you on a ride unlike any previous seasons, and by the time we end Season 3, you will literally be — your mind will be blown, and we will be getting you ready for a completely new kind of show. You're going to be like, "Holy crap, what the hell is going on, and what is going to happen next?" The first three seasons, there's this whole political intrigue. You've got this whole "Battlestar Galactica" vibe, and it's so hyper-realistic and gritty and earthy, and it's all about this conflict between these three races that are all human and everyone going after their agenda. And then, by the end of Season 3 — boom! Everything is pretty much blown wide open. The three races are going to be looking at each other like, "Why the hell are we even fighting?" It's a whole new type of show that's going to kick off in Season 4.

Space.com: Then bring on the rest of the season!