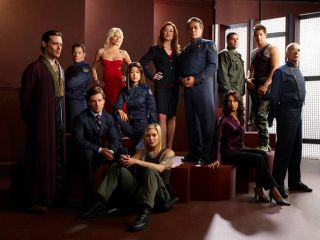 "Battlestar Galactica," which ran as a rebooted series from 2004 to 2009 on the TV channel Syfy, will be shown in a marathon starting Sept. 22.
(Image: © Syfy Channel)

The science-fiction TV network Syfy turns 25 this month, spurring a series of space-themed celebrations. Chief among them is an epic marathon of "Battlestar Galactica" (2004-2009) that starts airing Sept. 22 at 8 p.m. Eastern time.

The critically acclaimed series — a reboot of a show from the 1970s which aired on ABC — followed the last few thousand humans who took refuge in starships following an attack by robots they invented themselves, called the Cylons.

The 4-hour miniseries that kicked off "Battlestar Galactica" airs on Sept. 22, and Syfy will run the show's first season on Sept. 23 and Sept. 24 starting at 6 p.m. Eastern time. The entire series will be available on demand for 30 days, starting Sept. 22. [7 Awesome Sci-Fi Space Stations from TV and Film]

But the series is only one of several events that Syfy will host to honor the legacy of science fiction, including a podcast, a screening series and more.

"Over the past 25 years, science fiction has exploded in popularity, topping the charts with the biggest and most beloved television, movies, books and games," Alexandra Shapiro, executive vice president of marketing and digital at USA Network and Syfy, said in a statement.

"We thought, what better way to pay homage to our anniversary than by turning the spotlight on the genre-at-large to celebrate all the things we love, as well as the personalities and fans who make it the greatest community in the world?" she added.

Here is some of the other content that Syfy will host, according to the statement:

Some of Syfy's newer network offerings include a Superman prequel, "Krypton" (which will air in 2018) and a graphic novel adaptation of "Happy!" (which premieres Nov. 29 and stars Christopher Meloni, previously known for "Oz" and "Law & Order: Special Victims Unit").