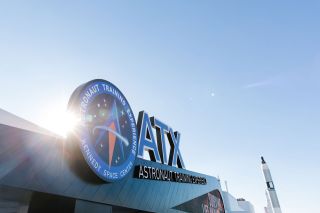 The all-new Astronaut Training Experience (ATX), opening in full in February, offers the public a high-tech, hands-on opportunity to see what it takes to prepare for a mission to Mars.

"This is the first time we are offering the ability for guests to actually come into Kennedy Space Center and look at the entire ATX, the Astronaut Training Experience, and have the ability to experience simulators and activities that are truly like working and living in space, as well as training like an astronaut," said Therrin Protze, chief operating officer of Kennedy Space Center Visitor Complex, in a statement. [The Best Mock Space Missions Ever]

For years, the official visitor center for NASA's Kennedy Space Center spaceport in Cape Canaveral has offered an off-site training program based on missions into low Earth orbit. With the retirement of the space shuttle in 2011, and with a desire to move the experience onto the main campus of the visitor complex, a new ATX has been developed over the past two years.

The new ATX, which is housed in what was previously the main entrance building to the visitor complex, is divided into two distinct programs.

The Astronaut Training Experience, for which segments will be for sale beginning in mid-January, challenges groups of up to 24 to simultaneously work in multiple training areas that replicate astronaut training devices of the future. Participants can attempt some of the same physical tasks that actual astronauts perform by working within reproduced environmental scenarios, such as the "Land-and-Drive-on-Mars" full-motion simulator; "Walk-on-Mars" virtual reality; a "Launch Mission"; and "Spacewalk Training." [Related: This Futuristic Mars Rover Looks Like an Awesome NASA Tank]

Mars Base 1, the second ATX program opening to individuals and groups in February, will provide visitors with a chance to live on Mars for seven hours as "rookie astronauts," while performing base operations and engineering tasks and conducting real science experiments.

In Mars Base 1's Engineering Lab, participants will design and test a program that allows a team of robots to efficiently clear debris from a photovoltaic panel, restoring maximum solar power to the facility. "Rookie astronauts" will also partner with scientists working on food production, planting, harvesting and analyzing vegetables and plants, and gathering data in the Mars Botany Lab.

"ATX and Mars Base 1 bring the future of space exploration to life," said Protze. "Guests looking to get as close to Mars as possible without actually becoming an astronaut will be able to have that opportunity at the new Astronaut Training Experience Center."

"For anyone who has wondered what it would be like to feel like an astronaut, to train like they train, face the challenges and issues they have to work though while under extreme pressure, Astronaut Training Experience and Mars Base 1 [will soon be] available to everyone," said Protze.