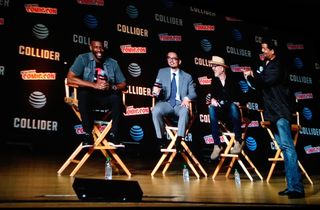 On Oct. 5, Main Stage 1 at the Javits Center in New York was packed with sci-fi fans who cheered on Tyson's lively discussion with StarTalk co-host Chuck Nice, Adam Savage from the program Mythbusters and bioethicist S. Matthew Liao of New York University.

The panelists, aware that they were addressing a room full of Iron Man and Batman enthusiasts, appropriately began their conversation by pondering why mechanized limbs and superhero gadgets do not exist in real life the way they do in science fiction stories. [New York Comic Con 2017! The Most Amazing Space Cosplay Photos]

"To augment is to add some sort of capacity," Liao said during the taping, suggesting that any tool we use, like a phone or car, is effectively a supergadget, even if it’s not physically attached to our brain.

"So we’ve been augmenting human bodies ever since we’ve had technology?" Tyson asked.

Savage interjected that some fictional devices, like Iron Man's suit, are theoretically plausible, but "the idea that it would work without flaw repeatedly … is an absolute fantasy!"

What makes a character a "superhero," according to Savage, is that the augmenting device that's used — in this case, Iron Man's suit — displays far fewer mechanical problems in comics than it would in real life.

"There's a reason NASA has never used cables to assist astronauts in their grip or their ability to move the suit," Savage said. "Engineers at NASA, as brilliant as they are, understand that extra moving parts means extra things that can go wrong." The newest SpaceX astronaut suit prototype, unveiled in September, seems to support Savage's claim to an extent; while the new suit is sleeker than a traditional spacesuit, it is only intended for emergencies, and the big and bulky suits used on the International Space Station remain the standard for performing spacewalks. A 'Boeing Blue' spacesuit unveiled in January, however, does feature some grip technology — in the form of touch-screen pads — on the gloves.

The panelists enjoyed playing around with the popular Marvel vs. DC comics debate, and the audience responded well to the sci-fi parlay. When Savage expressed his opinion that Batman’s extra flexibility would allow him to beat Iron Man in a fight, the crowd cheered, but quickly boos and laughter emerged.

"Tony Stark for life, baby!" Nice shouted, going along with the crowd.

Liao later touched on other uses for emerging bionic technology, such as suits that would provide deep brain stimulation to folks with Parkinson's disease or post-traumatic stress disorder in order to minimize their pain. StarTalk's first segment ended with a touch of humor, as Tyson asked his colleagues to imagine bionic athletes.

"A hammer fist will go up against a razor arm!" Savage said — prompting a roar of laughter from the audience.

In the second program segment, Liao explained a controversial paper he co-authored, about human augmentation to combat climate change.

According to Liao, some scientists are proposing to spray sulfate from aerosol cans into Earth's atmosphere to increase the reflectivity of clouds, but Liao argued that the experiment would risk destroying Earth's ozone layer and could be catastrophic.

In that context, he proposed something less dramatic, "which is this biomedical modification of human beings in order to allow us to mitigate or adapt to the effects of climate change." His idea: Humans should aim to have smaller bodies to combat climate change, since larger folks use up more resources.

Noticing the growing tension and whispers in the audience, Tyson diffused the mood with a joke, guessing that Liao's proposal meant that "The small people eat the larger people!"

The members of the audience laughed as they processed the unexpected ethics question. The other panelists made the conversation more digestible by teasing Liao, but Tyson reminded the audience that an ethicist's role is to follow a thought to its ultimate conclusion, even a difficult one. Liao made clear in his 2012 paper that his theory is open to further discussion, and that individuals should be free to make their own choices about their physical size, despite his recommendation.

Next, the panel discussed a genome editing tool called Clustered Regularly Interspaced Short Palindromic Repeats, or CRISPR. According to Liao, current investigations into the technology include exploring how to manipulate embryonic genetic material to make humans more HIV resistant in the future. While the tool could someday be incredibly useful, Liao emphasized that not all extensions of CRISPR were ethical — such as modifying the expression of physical racial attributes.

The 60th anniversary of Sputnik's launch was one of the night’s final themes, and Tyson observed that many in the audience were not old enough to remember how Americans felt when the USSR launched the first satellite into orbit around Earth.

The launch was a key moment in science, Tyson said as the presentation wrapped up: "We went, oh my gosh, I guess science really is important."