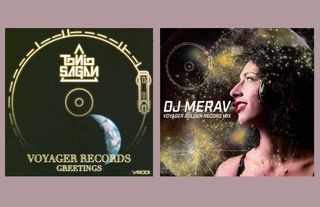 A new set of remixes of the Golden Record, which flew to space 40 years ago aboard the Voyager 1 and Voyager 2 spacecraft, doesn't just use "The Next Generation" (TNG) figuratively — the remixes come from the grandson of astronomer Carl Sagan, who masterminded the original Golden Record, and the daughter of Jon Lomberg, the original record's designer.

"The Golden Record: TNG" consists of two reinterpretations of the Golden Record's contents. Their work was shared as a part of the "One Earth Message" crowdfunding page helmed by Lomberg, which seeks to collect material for a "Golden Record 2.0" to be sent to the hard drive of the New Horizons spacecraft, currently flying out beyond Pluto.

"Tonio Sagan (eldest grandchild of Carl Sagan) and Merav Lomberg, aka DJ Merav, (daughter of record designer Jon Lomberg) independently turned their musical ears to their mutual family heirloom," reads a new update on the crowdfunding site. "They have each fashioned a reinterpretation of the audio materials recorded on the Golden Record."

You can listen to DJ Merav and Matt Switzer's reinterpretation, called "Greetings from Earth," on SoundCloud:

And Tonio Sagan's version, called "Voyager Records: Greetings" and first released in 2016, is on SoundCloud as well:

A 45-rpm vinyl record of Tonio's project is now included when backers pledge $55 or more on the "One Earth Message" Kickstarter page.