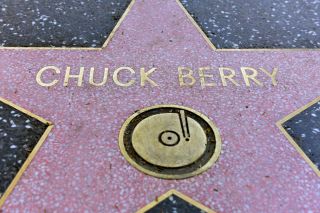 A view of Chuck Berry's Hollywood Walk of Fame Star in Hollywood, California. Berry passed away March 18, 2017 at a residence outside St. Louis. His song "Johnny B. Goode" is flying through interstellar space on NASA's Voyager 1 golden record.
(Image: © Rodin Eckenroth/Getty Images)

While rock and roll legend Chuck Berry died this Saturday (March 18), his music will live on for an eternity, going where no Earthling has ever gone before.

Two NASA spacecraft, the Voyagers, are heading into interstellar space carrying golden records with music and other messages from Earth, just in case intelligent extraterrestrials ever stumble upon them. Berry's 1958 hit "Johnny B. Goode" was among the tracks that made it onto the record.

NASA launched the Voyagers in the late 1970s to study the outer planets. In 2013, Voyager 1 became the first spacecraft to leave the solar system and enter interstellar space. Voyager 2 is expected to do the same in the next decade or so. [The Golden Record in Pictures: Voyager Probes' Message to Space Explained]

The late cosmologist Carl Sagan convinced NASA to put a special message for aliens on each of the two spacecraft. Sagan chaired a committee that selected 90 minutes of music from around the world, including classical tunes by Bach and Beethoven and jazz by Louis Armstrong. The golden records can also play greetings in 55 languages and have several natural sounds like thunderstorms, volcanic eruptions and animal noises.

For Berry's 60th birthday in 1986, Sagan and his colleague Ann Druyan, who co-wrote the PBS documentary series "Cosmos," wrote a letter to remind him that his music "will live forever" on the Voyagers. "These records will last a billion years or more," Sagan and Druyan wrote to Berry.

Berry passed away at his home near St. Louis on Saturday, the Associated Press reports. He was 90 years old.