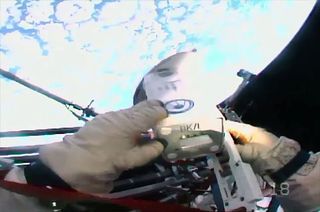 Cosmonaut Sergey Ryazanskiy prepares to deploy a nanosatellite outside the International Space Station on Aug. 17, 2017. The satellite's outer cover, which was removed before the satellite was pitched, bears a logo in honor of the 60th anniversary of the first satellite, Sputnik.
(Image: © NASA TV via collectSPACE.com)

Two cosmonauts stepped outside the International Space Station for a seven-hour spacewalk on Thursday (Aug. 17), in part to deploy three small satellites in tribute to the dawn of the space age 60 years ago.

Fyodor Yurchikhin, commander of the Expedition 52 crew, and Sergey Ryazanskiy, both of the Russian space agency Roscosmos, opened the hatch to the station's Pirs airlock at 10:36 a.m. EDT (1436 GMT), starting the extravehicular activity (EVA).

Yurchikhin, perched on a ladder just outside of the airlock, deployed the first nanosatellite — one of three created by Russian college students to honor the 60th anniversary of the launch of the first artificial satellite, Sputnik, on Oct. 4, 1957 by the Soviet Union. [Sputnik, Earth's First Artificial Satellite (Photos)]

Yurchikhin tossed the satellite below and to the rear of the space station to avoid it ever coming back in contact with the complex. The Tomsk-TPU 120 satellite will operate for about a year and a half, transmitting voice messages and telemetry on amateur radio. Created by students at Tomsk Polytechnic University, in collaboration with the aerospace corporation RSC Energia and with the Institute of Strength Physics and Materials Science of the Siberian Branch of Russian Academy of Sciences, the Tomsk-TPU 120 is first cubesat to be built entirely from a 3D printed body.

Ryazanskiy, who is the grandson of an early Soviet rocket scientist and pioneer in radio control systems, next pitched Tanyusha-YuZGU 1 and 2, a pair of nanosatellites that will interact with each other and measure vacuum density while transmitting greetings in Russian, English, Spanish and Chinese.

The Tanyusha project, by Energia and Southwestern State University in Kursk, also commemorates 160 years since the birth of Konstantin Tsiolkovsky, credited as the father of Russian astronautics and spaceflight.

The Tomsk and Tanyusha satellites will broadcast on the amateur radio frequencies 437.025 MHz and 437.05 MHz, respectively.

Ryazanskiy also deployed two additional nanosats: TNS-0, to test sensor equipment and an experimental navigation system over the next three to five months; and the TS530-Zerkalo satellite, which like the original Sputnik was built into a metal sphere. The latter will measure the density of Earth's atmosphere in order to better predict the motion of spacecraft in low-Earth orbit, like the space station.

"This one was the best," remarked Ryazanskiy, referring to the Zerkalo satellite.

"Because it is round," replied Yurchikhin, who joked that it looked like a face as it drifted away from the station.

In addition to deploying the five satellites, Yurchikhin and Ryazanskiy also inspected and collected residue samples from various locations outside the Russian segment of the space station and installed handrails and struts to facilitate future excursions.

The spacewalk also served as the first test of an upgraded version of Russia's EVA spacesuit. Yurchikhin donned the first of the modernized Orlan MKS suits, equipped with an advanced, automated thermal control system and a built-in computer. The new pressure suit is also designed to better protect against wear and tear.

Thursday's spacewalk, which came to an end at 6:10 p.m. EDT (2210 GMT), 7 hours and 34 minutes after it began, marked Yurchikhin's ninth EVA. With a career total time of 59 hours and 28 minutes, Yurchikhin now ranks fourth on the list of worldwide spacewalkers by time.

Ryazanskiy has now spent 27 hours and 39 minutes on four spacewalks.

The EVA was the seventh excursion of the year and 202nd in support of space station assembly and maintenance.