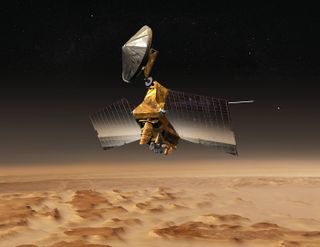 How clean do cleanrooms need to be for outbound spacecraft, say headed to Mars or Europa to look for life?
(Image: © NASA/JPL/Caltech)

Just how clean are spacecraft clean rooms? Turns out, they have some dirty little secrets.

As multiple nations lob spacecraft to Mars, there's always the concern that Red Planet-bound vehicles might provide a free ride to organic material and microbes. That material could pollute a place that is otherwise thought to be biologically immaculate.

Moreover, unintentional inoculation of Mars with Earthly microorganisms or other contaminants could imperil the scientific validity of spotting a true Martian biosignature, because scientists would have to distinguish it from an organism that was transported from Earth. [5 Bold Claims of Alien Life]

While special care is given to probes headed to Mars — or other destinations with the potential to host past or present life — it turns out that spacecraft clean rooms are due for increased scrutiny.

In regards to microbes, spacecraft clean rooms are designed to be harsh, dry, low-nutrition environments. But there are some lifeforms out there that can withstand these extremes.

"There's some really weird [microbes], and they have capabilities that you wouldn't expect," said Cassie Conley, NASA's planetary protection officer.

Clean room conditions will kill most microbes, but they can also cause subsequent generations of microbes to develop traits that make them ideally suited to survive those conditions, she said.

"So clean rooms are actually selecting for organisms that could perhaps survive better on Mars," Conley told Space.com. "We're learning that there's a whole bunch of stuff in there that we didn't know about."

John Rummel, a senior scientist at the SETI Institute in Mountain View, California, agreed with Conley's assessment of the microbe issue.

"At the same time as researchers are keeping the clean rooms clean, by not completely sterilizing them, we end up selecting for microbes that can deal with increasingly higher levels of contamination control methods," Rummel said. "It is a race, albeit a very sparse one, with smaller numbers of microbes, but tougher ones."

That's one reason terminal sterilization — the process of destroying all microorganisms and their pathogenic productsvia particularly harsh methods — makes sense for spacecraftlooking for life elsewhere, Rummel said.Doing so, he added, "terminates the microbes, but hopefully not the spacecraft!"

For NASA, work is speeding up on the space agency's Mars 2020 rover mission. That robot will be caching select samples of the Red Planet for possible return to Earth in the future.

"So that's why it is so important to keep the samples from the Mars 2020 mission very clean … to look for possible biosignatures … indicators of organisms on Mars," Conley said. "Also, everybody talks about looking for ancient life on Mars. But there might be modern life there."

While planetary protection of the Red Planet has been a concern for decades, perhaps the harsh environment of Mars would kill Earth-transported microbes anyway, said Madhan Tirumalai, a postdoctoral researcher at the Department of Biology and Biochemistry at the University of Houston.

"My answer would be that they are highly unlikely to survive," Tirumalai said. "Mars, with its radiation levels, would simply obliterate these organisms."

However, these organisms are important for several reasons, Tirumalai said. For one, obtaining an inventory of all potential organisms that thrive in the extreme environments of spacecraft clean-room facilities will give an idea of whatnot to look for in a sample from elsewhere.

Also, there are bacteria that can, in some cases, survive doses of radiation thousands of times higher than the amount that would kill a human being. Radiation resistance by itself likely is a major factor in the evolution of life, Tirumalai said, noting that the genomes of prokaryotes (single-cell organisms) are under constant attack from different sources of ionizing radiation.

"Radiation resistance is a highly regulated mechanism involving different genetic pathways," Tirumalai said. "Given that the conditions during the early origins and the evolution of life were characterized by high doses of ionizing radiation, the origins of radiation resistance can possibly be traced back to the last universal common ancestor."

By investigating topics such as the genomics of radiation resistance, this research can help scientists foresee and understand similar mechanisms, if any exist, on other planetary bodies such as Mars, Tirumalai said.

"Furthermore, there are potential spin-offs in relating our understanding of these mechanisms of DNA repair pathways to similar repair pathways involved in conditions as in cancer," Tirumalai said.

The Biotechnology and Planetary Protection Group at NASA's Jet Propulsion Laboratory (JPL) in Pasadena, California, has performed a study revealing the widest microbial profile of the Mars2020 spacecraft assembly clean room, including bacteria, archaea (a type of microorganism), fungi and viruses, according to one of the group scientists, Parag Vaishampayan. Another study performed by the group indicated the presence of diverse and abundant fungi in the spacecraft-assembly clean room, he said.

The study also suggests that the microorganisms in a clean room environment are "influenced by both the human microbiome and the surrounding ecosystem," Vaishampayan said.

Vaishampayanand his colleagues are planning a study of the genetic material in clean room microbes in order to "identify and characterize the microbial population present during the spacecraft assembly of the [Mars 2020 rover] mission."

Despite numerous characterizations of microbial populations in spacecraft and associated clean rooms, Vaishampayan said that understanding the metabolic traits responsible for the microbes' persistence and survival remains a significant challenge.

"This knowledge gap restricts our efforts to estimate true planetary protection risk, especially for future missions to Jupiter's moon Europa," Vaishampayan said. Evidence that Europa has a liquid water ocean and geothermal heating below its icy crust have led scientists to conclude that the moon possesses a potentially habitable subsurface-environment. NASA is currently planning an orbital mission to the icy moon.

Meanwhile, issues of planetary protection and the Red Planet loom — and are assuredly not going away.

Could the surface of Mars support the metabolism and growth of Earth-transported microorganisms?

Is Mars a litmus test for how Earthkind treats possible life on neighboring worlds, given our enduring quest to search for and understand life beyond our own planet?

"It's unfortunate so many people don't seem to understand that transferring potentially biohazardous material between Mars and Earth could be problematic for life on both planets," Conley said. "There are lots of biohazards on Earth … Do we really want to bring them to Mars indiscriminately?"

Leonard David is author of "Mars: Our Future on the Red Planet," published by National Geographic. The book is a companion to the National Geographic Channel series "Mars." A longtime writer for Space.com, David has been reporting on the space industry for more than five decades. Follow us @Spacedotcom, Facebook and Google+. Original article on Space.com.