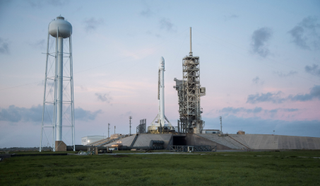 A SpaceX Falcon 9 rocket shown here on the launch pad at Cape Canaveral Air Force Station in Florida on June 23, 2017. On June 25, SpaceX is scheduled to launch another Falcon 9 from Vandenberg Air Force Base in California.
(Image: © SpaceX)

One day after putting Bulgaria's first communications satellite into orbit, SpaceX is preparing for a Falcon 9 launch from Vandenberg Air Force Base in California tomorrow (June 25). The rocket will deliver a second batch of next-generation spacecraft for the company Iridium Communications.

Liftoff of SpaceX's ninth mission this year is scheduled for 1:25 p.m. PDT (4:25 EDT/2025 GMT). After sending 10 Iridium satellites on their way to orbit, the rocket's first stage will turn around and attempt to land itself on a drone barge floating in the Pacific Ocean.

The flight is the second of eight missions SpaceX plans for Iridium, which is in the midst of a $3 billion upgrade of its satellite constellation, which provides global, mobile communications services. [SpaceX's Falcon 9: Rocket for the Dragon]

The booster used to deliver the first batch of next-generation Iridium satellites in January flew for a second time yesterday (June 23) to put BulgariaSat-1 into orbit. The satellite was commissioned by Bulgaria Sat, the country's only satellite provider, according the company website.

"We really think this is the way of the future," Bulgaria Sat CEO Max Zayakov told Space.com.

Bulgaria Sat was the second company to take advantage of an earlier launch opportunity and an undisclosed discount SpaceX offered for flying on a pre-flown Falcon.

Iridium CEO Matt Desch said he is open to the idea of using a pre-flown booster, but that he'd prefer to wait a bit to let SpaceX build some flight history with the boosters.

"I believe previously flown boosters are fantastic. I think it's revolutionizing the industry," Desch said during a conference call with reporters before launch. "Our using them or not using them is not a statement [about] the quality or capability of those boosters."

With seven Falcon 9 launches pending in the next 12 months, Iridium is more interested in schedule and reliability than in any financial discounts for using pre-flown boosters, Desch said. He characterized the current discounts as "minor."

"I believe the risk [of using pre-flown rockets] is pretty low right now, but it's not zero, because it's a new thing," he said.

"I'm open to previously flown [rockets], particularly for the second half of our launch schedule, maybe in 2018," Desch added. "Over the coming months … if there are additional launches [of previously flown rockets], I'll reconsider that."

Iridium is replacing its 20-year-old satellite network with next-generation satellites, 75 of which will be launched by SpaceX. The constellation consists of 66 operational spacecraft, nine spares in orbit and five spares to be stored on the ground.

The new spacecraft are faster and more powerful, and, for the first time, will allow worldwide tracking of aircraft in addition to mobile voice and data services.

With a successful launch on Sunday, SpaceX will have surpassed its annual flight record with half the year still to come.

SpaceX has a backlog of more than 70 missions, worth more than $10 billion, company representatives have said. About a dozen more launches are still pending for 2017, including the debut flight of the Falcon Heavy, a 27-engine version of the Falcon 9 (which uses 9 engines).