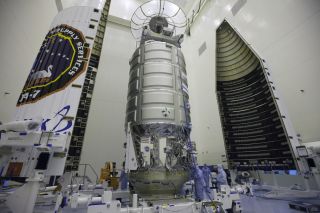 The Orbital ATK Cygnus spacecraft S.S. John Glenn is seen before being encapsulated in its protective shroud at the Payload Hazardous Servicing Facility at NASA's Kennedy Space Center in Cape Canaveral, Florida on March 9, 2017. The cargo ship will launch atop an Atlas V rocket on March 21 to deliver NASA cargo to the International Space Station.
(Image: © Kim Shiflett/NASA)

The launch of an Orbital ATK cargo ship to deliver nearly 4 tons of NASA to the International Space Station this month has been delayed by at least two days due to a rocket glitch.

The robotic Cygnus cargo ship, which was previously scheduled to launch March 19 from a pad at Florida's Cape Canaveral Air Force Station, will now lift off no earlier than March 21 at 10:56 p.m. EDT (0256 GMT), according to a NASA statement released Friday (March 10). The space agency cited a technical issue with the United Launch Alliance (ULA) Atlas V rocket that will launch the Cygnus as the delay's cause.

"During prelaunch testing March 10, ULA discovered a booster hydraulic issue at the pad, and the additional time will allow their team to replace a component and continue with launch preparations," NASA officials wrote in a statement.

Orbital ATK's Cygnus spacecraft is packed with 7,600 lbs. (3,447 kilograms) of supplies and research equipment for the space station's crew.

The OA-7 mission will be the seventh delivery mission for NASA by Orbital ATK, and the third to launch a Cygnus spacecraft using an Atlas V rocket. Orbital ATK typically uses its own Antares rockets for Cygnus flights. The company launched two missions on Atlas V boosters while recovering from an Antares failure in 2014 and opted to use an Atlas V for the OA-7 due to the booster's ability to launch more cargo.

Orbital ATK's Cygnus will be the second commercial cargo ship to haul supplies to the International Space Station for NASA this year. On Feb. 23, a SpaceX Dragon spacecraft arrived at the station to deliver 5,500 lbs. (2,500 kilograms) of supplies.

The Cygnus spacecraft that will fly on the OA-7 mission has been named the S.S. John Glenn by Orbital ATK to honor astronaut John Glenn, the first American to orbit Earth, who died in December.