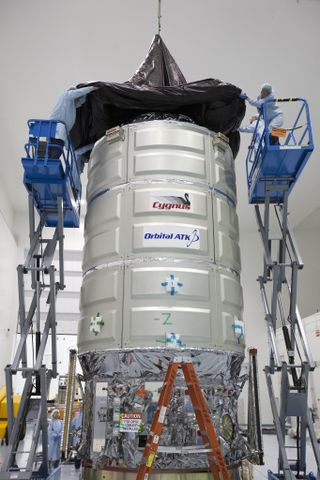 In the Space Station Processing Facility high bay at NASA's Kennedy Space Center in Florida, a crane is used to lower a protective covering around the Cygnus pressurized cargo module on Feb. 21.
(Image: © Bill White/NASA)

Packed with supplies and science gear, the Cygnus cargo craft is scheduled to blast off atop a United Launch Alliance Atlas V rocket from Cape Canaveral Air Force Station in Florida during a 30-minute launch window beginning at 10:56 p.m. EDT (0256 GMT on March 20).

Along with more than 7,500 lbs. (3,400 kilograms) of cargo and supplies for the astronauts aboard the space station, Cygnus will carry several science experiments, including dozens of cubesats, a new habitat for growing plants and targeted cancer therapies.

During a prelaunch teleconference Monday (March 6), Henry Martin, small-satellites mission coordinator for NanoRacks in Houston, noted that 38 cubesats, or microsatellites, will hitch a ride to space on the Cygnus cargo craft. Four of the 38 satellites will deploy directly from the Cygnus craft during the flight, and the rest will be deployed from the space station. A group of 28 cubesats from around the world will fly on OA-7 before being deployed from the space station for the QB50 mission, which seeks to investigate Earth's lower thermosphere, the part of the atmosphere that starts at about 50 miles (80 kilometers) above the planet's surface and extends into outer space.

A new plant-growing habitat will also fly to the space station with OA-7. The Advanced Plant Habitat will be the largest plant-growth system ever launched to the orbiting laboratory and will allow astronauts to grow larger crops than they could previously, Howard Levine, project scientist at NASA's Kennedy Space Center in Florida, said during the teleconference. [Plants in Space: Photos by Gardening Astronauts]

One of the experiments flying to the space station on OA-7 will test how new cancer-fighting drugs work in microgravity. By sending this experiment to space, researchers can see how the cancer drug works in 3D as opposed to 2D tests done on a petri dish in a laboratory on Earth, principal project investigator Sourav Sinha — CEO of Oncolinx LLC, which develops antibody-drug conjugates — said during the teleconference. The project, titled "Efficacy and Metabolism of Azonafide Antibody-Drug Conjugates in Microgravity," seeks to increase the effectiveness of chemotherapy drugs while reducing side effects.

Another biology experiment will use magnets to study cell cultures as they grow into 3D shapes in microgravity. During the teleconference, Glauco Souza, principal investigator of the biotechnology startup Nano3D Biosciences in Houston, discussed how magnetized cells and tools will make it easier to study and handle cell cultures in space and make experiments with cell cultures easier to reproduce. This will be the first time that magnets are used for biological studies in space, Souza said. The first cells that astronauts aboard the space station will study using this experiment are lung cancer cells. [How Space Station Tech Is Helping the Fight Against Cancer]

Another experiment, called Red-Data 2, from Terminal Velocity Aerospace in Atlanta, will send along a new type of data-recording device that will ride inside the Cygnus cargo craft as it re-enters Earth's atmosphere while stuffed with nonrecyclable waste from the space station. Both Cygnus and the experiment will burn up upon re-entry, but Red-Data 2 will provide data about the conditions the spacecraft encounters along the way. This experiment may come in handy for testing new heat shields for NASA, John Dec, an engineer at Terminal Velocity Aerospace and principal investigator for the project, said during the teleconference.

For its last cargo resupply mission to the International Space Station, Orbital ATK's Cygnus cargo craft carried a flame experiment and several other science projects. Find out more about the science aboard the last Cygnus mission here.