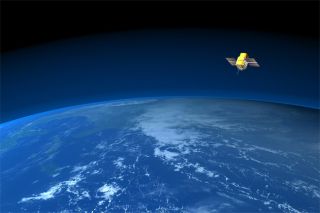 New research shows that the outermost layer of the atmosphere will lose 3 percent of its density over the coming decade, a sign of the far-reaching impacts of greenhouse gas emissions. As the density declines, orbiting satellites experience less drag.
(Image: © ©UCAR.)

SAN FRANCISCO — When the sun is relatively inactive as it has been in recent years, the outermost layer of Earth's atmosphere cools dramatically, new observations find.

The results could help scientists better understand the swelling and shrinking of our planet's atmosphere, a phenomenon that affects the orbits of satellites and space junk.

The data, from NASA's TIMED mission, show that Earth's thermosphere (the layer above 62 miles or 100 km above the Earth's surface) "responds quite dramatically to the effects of the 11-year solar cycle," Stan Solomon of the National Center for Atmospheric Research in Boulder, Colo., said here this week at the annual meeting of the American Geophysical Union.

Knowing just how the energy flowing out from the sun naturally impacts the state of the thermosphere also will help scientists test predictions that man's emissions of carbon dioxide should cool this layer. (While that may seem to contradict the idea of global warming, it has long been known that carbon dioxide causes warming in the lowest part of the atmosphere and cooling in the upper layers of the atmosphere.)

Earth's thermosphere is one of the least explored parts of the atmosphere, but it is important because "the thermosphere is where the sun first interacts with our atmosphere," said James Russell III of Hampton University in Hampton, Va.

NASA launched the Thermosphere-Ionosphere-Mesophere Energetics and Dynamics (TIMED) mission in 2001 to get a better picture of this outer layer. The energy that comes into it from the sun is absorbed by air molecules and reradiated to space during the normal ups and downs in solar energy that occur over a roughly 11-year time span.

The sun has been in a particularly prolonged and deep solar minimum for the last couple of years, with fewer sunspots and solar storms erupting on its surface. When the sun is in this state, it also sends less energy out in the soft X-ray and extreme ultraviolet parts of its spectrum. These wavelengths of light have a significant impact on the thermosphere, where air molecules absorb their energy and the reradiate it in the form of infrared energy.

The TIMED mission measured both the amount of incoming solar energy in the thermosphere and the amount of energy being sent back out into space from the layer and found a significant decrease in both.

"The sun is in a very unusual period," said Marty Mlynczak, a TIMED team member at NASA Langley in Virginia. "The Earth's thermosphere is responding remarkably — up to an order of magnitude decrease in infrared emission/radiative cooling by some molecules."

Less radiation in both directions means that this layer of the atmosphere also cools substantially. In fact, the thermosphere has cooled by a factor of 10 since the last solar maximum in early 2002.

"I certainly didn't expect to see this eight years ago," Mlynczak said.

The exact temperature of the thermosphere can vary substantially, but the average temperature above 180 miles (300 km) is about 800 degrees Fahrenheit (427 degrees Celsius) at solar minimum and 1,700 degrees Fahrenheit (927 degrees Celsius) at solar maximum. (Though these temperatures sound hot, you would not actually feel warm in the thermosphere, because the molecules in that layer are too far apart.)

The temperature at this extreme solar minimum is likely a few degrees colder than in an average minimum, but that small change can cause a large change in the density of the layer.

This same cooling effect is expected to happen (somewhat counterintuitively) as carbon dioxide concentrations increase from emissions at Earth's surface. So understanding the natural variability of this layer is important to detecting any changes from carbon dioxide increases.

The cooling effect also has an effect on the orbits of satellites, because it changes the density of the atmosphere layer. For example, if the layer heats up, it expands like a marshmallow in a microwave, as several scientists described it, and lower, denser parts of the atmosphere rise to higher altitudes. Essentially, as the upper atmosphere expands, the lower atmosphere also expands to fill the space. When the thermosphere cools, the opposite happens and the layers deflate and sink to lower altitudes.

The changing density means that satellites end up with either more or less drag on them, which can change the shape of their orbits. In the case of something like the Hubble Space Telescope, this can have implications on the orbiter's lifetime, Solomon told LiveScience. Less drag during a cooler period means the satellite might live longer, he said.

The cooling also could have implications for the buildup of so-called "space junk" — old satellites and pieces of satellites that have begun to litter the upper atmosphere and can pose a threat to other orbiting spacecraft, such as the International Space Station. Less drag means this junk gets speedier and could pose more of a threat.

More work is needed to fully understand the links between the sun's energy, rising greenhouse gas emissions and the Earth's outer atmosphere, the scientists said.