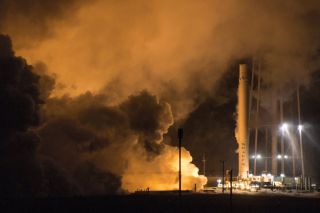 Image of a January 2017 static-fire test of the first stage of a SpaceX Falcon 9 rocket that already has one spaceflight under its belt. The booster launched SpaceX’s robotic Dragon cargo capsule toward the International Space Station in April 2016.
(Image: © SpaceX Twitter)

SpaceX is gearing up for its first-ever launch of a used rocket.

SpaceX routinely performs static fire tests at the Texas facility before rockets are shipped to one of the launch sites the company uses: Cape Canaveral Air Force Station and NASA's Kennedy Space Center (KSC) in Florida, and Vandenberg Air Force Base in California. (SES-10 will lift off from KSC.)

SpaceX has landed a total of seven Falcon 9 first stages, with the first such success coming in December 2015 during the launch of 11 satellites from Cape Canaveral for the company Orbcomm.

The CRS-8 mission marked SpaceX's second successful touchdown and recovery. There have been five more since then; the latest occurred Jan. 14 of this year, when a Falcon 9 first stage landed on a robotic SpaceX ship at sea after launching 10 satellites for the communications company Iridium. (Five of the seven landings, including the CRS-8 mission's touchdown, have occurred on such "drone ships." During the other two, the rocket stage came back to the launchpad on terra firma.)

These rocket landings are part of SpaceX's effort to develop fully reusable boosters — a breakthrough that SpaceX founder and CEO Elon Musk has said should spur spaceflight by dramatically reducing its cost. Therefore, the re-flight of the CRS-8 first stage will be a very big deal for the company, whenever it occurs.

Musk shares an enthusiasm for reusability with fellow billionaire Jeff Bezos, who runs the private spaceflight company Blue Origin (as well as Amazon.com). Indeed, Blue Origin launched and landed the same New Shepard rocket five times during test missions that took place between November 2015 and October 2016. All of these flights were suborbital, however; SpaceX's landings have occurred during launches to Earth orbit.