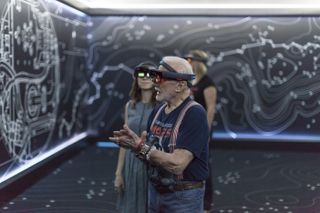 Real-life astronaut Buzz Aldrin introduced his virtual counterpart Sunday (Sept. 18) at the Kennedy Space Center Visitor Complex in Florida, previewing a new "mixed reality" exhibit that lets visitors explore the surface of Mars with a virtual Aldrin as their guide. The exhibit officially opened to the public Monday (Sept. 19) and will be open until the end of the year.

NASA's Jet Propulsion Laboratory (JPL) in California developed the program, called "Destination: Mars," in partnership with Microsoft HoloLens. Visitors use a HoloLens headset, which makes virtual imagery visible on top of the real world, to experience Mars as observed by NASA's Curiosity rover.

Aldrin, who flew on the Apollo 11 mission to the moon, recalled how inspirational the moon landing was for a generation of potential space scientists. Perhaps, he said in a statement, this type of technology could have a similar effect.

"Technology like HoloLens leads us once again toward exploration," Aldrin said. "It's my hope that experiences like 'Destination: Mars' will continue to inspire us to explore."

In the virtual world, Aldrin and Erisa Hines, who drives the real-life rover from JPL, guide viewers through the Martian landscape.

"Destination: Mars" uses software developed at JPL, called OnSight, which lets researchers wearing HoloLens sets participate in a shared virtual reality and plan out routes and points of interest for the Mars rover. Researchers using OnSight could be situated anywhere in the world and interact intuitively with the Martian landscape from the rover's point of view.

Microsoft's HoloLens is not yet commercially available to the public, but visitors to Kennedy Space Center will have a rare opportunity to try out the technology — at least until the exhibit closes, Jan. 1, 2017.