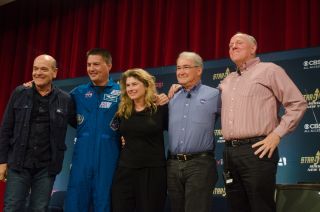 NEW YORK —  In the fictional universe of "Star Trek," space crews set out on voyages seeking strange new worlds and unknown life, to boldly go where no man has gone before. Today, NASA is following in the footsteps of that vision laid out by the franchise 50 years ago, specifically with its anticipated journey to Mars.

"The most fundamental parallel between NASA and 'Star Trek' is the charter to explore and expand human knowledge beyond what we know now and to try to study, understand and communicate what the rest of the galaxy is like," Dave Lavery, NASA's program executive for solar system exploration, told Space.com.

Lavery has been a science-fiction fan for as long as he can remember. Growing up during the Apollo era, he was fascinated by everything related to science and space. His interest in "Star Trek" has deep roots in the original series, and throughout his life, he has witnessed numerous ways in which the franchise crosses paths with NASA. [Astronauts and 'Star Trek': TV Show Inspired Real Space Travelers]

"'Star Trek' helped people see where we as a country, and as a planet, could be headed, and helped influence the support of NASA and other space programs to do the work that we are doing today," Lavery said.

One of Lavery's favorite "Star Trek" episodes, from Season 2 of the original series, is called "A Piece of the Action." During this episode, the crew of the USS Enterprise ends up on a planet called Sigma Iotia II, which resembles a U.S. city in the 1920s, with residents dressed as gangsters carrying tommy guns.

In the episode, it turns out that the city was modeled after a book titled "Chicago Mobs of the Twenties," which may have been left on the planet by the crew of another "Star Trek" space vessel called USS Horizon, which went missing a hundred years earlier.

"It got me thinking that, if there is extraterrestrial life out there, we have to be careful of how we get introduced to them and how they are introduced to us, so that we don't change who they are and they don't change who we are," Lavery said. "Those are things that we really have to think about as we start to expand beyond Earth. We want to understand Mars as much as we possibly can before we actually send humans there, because once we have a human set foot on that planet, it will never be the same."

A fundamental theme of "Star Trek" is to explore deep space. That is exactly what NASA is attempting to do — though it is not as easy as the USS Enterprise crew made it look.

However, the technological capability for something like the "Star Trek" warp drive, which lets a spaceship travel at faster-than-light speeds, doesn't yet exist. With current technology, traveling to Mars is a 180-day trip. For comparison, astronauts can arrive at the International Space Station in low Earth orbit in as little as 6 hours.

"In order to really set up shop on Mars … it requires technology that we have been developing over the last few decades," Jeffrey Sheehy, senior technical officer of NASA's Space Technology Mission Directorate, said during a panel discussion at the "Star Trek": Mission New York convention on Sept. 4.

Sheehy added that the technology being developed would have enough power and propulsion capability to get crewed space vehicles all the way to Mars, and would also have life support capabilities such as tools to make oxygen from the Martian atmosphere. However, he also noted that visitors to Mars would have to learn to live off the land, just as pioneers did when settling in new areas of North America. In other words, they'd have to do a lot of the things Mark Watney did when he was stranded on the Red Planet in last year's movie "The Martian."

NASA scientists are investigating resources available on Mars and developing technologies to use them, Sheehy said.

"We [NASA] are really excited about the next steps we are taking towards the human missions to Mars and actually becoming a true interplanetary species [like 'Star Trek'], and that is our next step towards the future that 'Star Trek' promised," Lavery told Space.com.