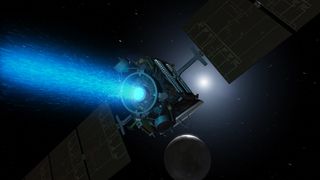 The Dawn spacecraft used futuristic ion engines to fly between the asteroid Vesta and the dwarf planet Ceres. Ion drives are one of many "Star Trek" technologies NASA is pursuing.
(Image: © NASA)

"Star Trek" technologies are starting to become a reality in our everyday lives; just ask anyone who owns a cellphone or tries a virtual reality headset. But how real are these "Star Trek" technologies in space today, 50 years after the iconic science fiction series' TV debut? While the tech for warp drives and transporters remains elusive, NASA is using some technology in space that would be at home on the starship Enterprise.

One key way NASA is emulating "Star Trek" is by finding ways for humans to spend years in space without requiring constant resupply missions from Earth, said Jason Crusan, NASA's director for advanced exploration systems. This means using the International Space Station as a test bed for technology that can extend an astronaut's stay in space and thus could be used one day on the long journey to Mars.

"Humans have a lot of salt in our waste," Crusan told Space.com. So, in late June, NASA awarded Paragon Space Development Corp. a $5.1 million contract to create a Brine Processor Assembly for flight in 2018. This assembly is expected to remove brine and recover up to 94 percent of the water from urine, NASA officials said in a statement.

Ongoing technology developments also allow astronauts to manufacture their own tools using 3D printing and to use atmospheric monitors to check the air in the cabin environment for contaminants. Those monitors shrink huge gas chromatography mass spectrometry units, which identify different substances in test samples, to about the size of a toaster.

All of these are important considerations in sending a future crew to Mars in an Orion spacecraft, along with one to three other habitat modules attached to provide extra room, Crusan said. This "Orion plus" spacecraft would likely have solar electric propulsion capability — engines that ionize noble gases to give a small amount of thrust and run for long periods of time, Crusan said.

Moving around in space

Batchelor recently republished a list of "Star Trek" technologies used in real life; this list has been available in different versions on NASA's website since 1993, and he is asked to update it every once in a while, he told Space.com.

Indeed, there have been several recent additions to that list. Lasers have been used to send test communications to the moon. NASA is simulating its new space transportation system using supercomputers. "Super-telescopes," such as Kepler and the Hubble Space Telescope, are discovering and exploring strange new worlds from a distance. And there are even androids (of a sort) on Mars.

"Although they're not shaped like Mr. Data, the Curiosity rover and rovers like that are actually robotic," Batchelor said. "They are autonomous, and they do things according to a plan, without [immediate] human intervention."

The Mir space station, which operated from 1986 to 2001, experienced a serious fire late in its operational phase, so NASA and its Russian partners on the International Space Station are well aware of the danger that fire poses to human lives in space. But fire behaves much differently in microgravity, and of course, no one wants to conduct tests near astronauts. Understanding how to mitigate fire is one of the biggest ways to keep astronauts safe for long periods of time.

"Fire is really bad in space, obviously, and we also don't understand it," Crusan said. NASA's solution is to set a fire inside the Cygnus spacecraft after it undocks from the station, in a mission called the Spacecraft Fire Experiment (Saffire) series. The first experiment in the series ran in June on a single 16-by-37-inch (41 by 94 centimeters) fiberglass and cotton cloth, known as a SIBAL cloth. (SIBAL is short for "Solid Inflammability Boundary at Low Speed.")

Saffire-II will look at nine smaller segments, and Saffire-III will have a large sample again. By the fourth, fifth and sixth increments, NASA plans to bring a combustion product monitor along to monitor the experiment — it's an advanced version of a smoke detector, Crusan said. It uses lasers to look at the chemical compounds emitted even before humans are aware there is smoke.

NASA employees continue to see "Star Trek" as inspiration for more "Star Trek" space exploration technologies, Batchelor added. "There are certainly plenty of NASA employees that are 'Star Trek' fans," he said, adding, "People do try to make it happen."

"You can't invent something if you haven't imagined it," Thaller said, in reference to warp drives and transporters used in "Star Trek."

The idea behind being able to change the nature of space-time to travel faster than the speed of light — the fundamental concept behind a warp drive — "may turn out to be the real foundation of the next phase of modern physics," Thaller said.

For example, scientists have had success with experiments involving quantum teleportation, which is the process of "teleporting" very small atoms or molecules from one location to another. These particles never travel; rather, they stop existing in one place and start existing in another, Thaller explained. (It's the quantum information about the object that goes from one place to another.)

"Quantum teleportation, we believe, probably works because every particle in the universe is connected to every other particle by a wormhole — by some sort of tie through space-time that we are only just becoming aware of now," Thaller said. "It is still theoretical at this point, but we believe that our experiments really require that to be true."

Now, scientists are exploring the separation between space and time, Thaller said. "There may be a very deep, underlying, physical connection that we can use to make a warp drive or teleporter. That [idea] is real; it is what is actually going on in modern physics right now."