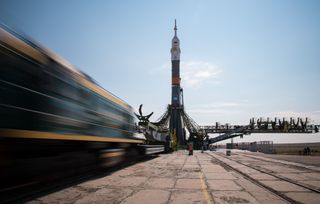 The Soyuz MS-01 spacecraft on the launchpad at the Baikonur Cosmodrome in Kazakhstan on Monday, July 4, 2016. Three crewmembers will make a two-day trip to the International Space Station in the upgraded vehicle.
(Image: © (NASA/Bill Ingalls))

Two astronauts and one cosmonaut will begin a two-day journey to the International Space Station tonight (July 6), rather than the more common 6-hour trip.

The three crewmembers are set to launch from the Baikonur Cosmodrome in Kazakhstan at 9:36 p.m. EDT (0136 GMT on July 7). During the two-day flight to the station, the space travelers will test a variety of upgraded systems on the Soyuz MS-01 spacecraft, which has a little more interior living space than a large van.

Two-day trips to the International Space Station were the norm until 2013, when the Russian space agency implemented a new technique to get crewmembers to the station in just 6 hours.

NASA astronaut Kate Rubins, Japanese astronaut Takuya Onishi and Russian cosmonaut Anatoly Ivanishin will orbit Earth 34 times before docking to the station at 12:12 a.m. EDT (0412 GMT) on Saturday, July 9. The crewmembers are scheduled to stay on the station for about four months, returning in October, according to NASA.

During their two days in orbit, the three crewmembers will test out a number of upgrades to the Soyuz spacecraft, NASA officials said in a statement. Those upgrades include "a new digital video transmitter and encoder to send engineering video of the ship's approach to the station for docking, a new relay telemetry capability along with an upgraded Kurs automated rendezvous antenna and an improved satellite navigation system to better calculate the Soyuz's position in space." The spacecraft is now also equipped with upgraded thrusters, additional micrometeoroid debris shielding, redundant electrical motors on the docking probe and additional photovoltaic cells on the spacecraft's solar arrays, the statement said. The upgraded systems have already been tested sans crew.

The first Soyuz crewmembers to make the expedited journey to the station were aboard Expedition 35, in November 2013. A NASA representative told Space.com that during training, Soyuz crewmembers prepare for extended stays in the Russian space vehicle, and there have been previous instances in which a Soyuz crew has had to stay longer than expected inside the vehicle.

Editor's Note: This article previously stated that the launch was on June 6, but it is actually July 6.