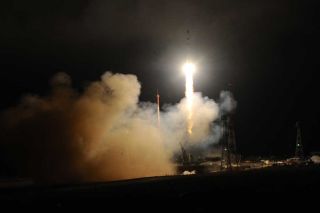 "[It's] a flawless ascent to orbit for the Progress resupply vehicle, the second in as many weeks to head to the International Space Station, with a third resupply ship, the SpaceX Dragon cargo craft, scheduled for launch on April 8," NASA spokesperson Rob Navias reported from Mission Control Houston during a NASA TV broadcast. [The Space Station's Robotic Cargo Ship Fleet in Pictures]

The craft will make its way to the space station over the course of two days. Although Progress spacecraft normally take less than a day to reach the orbiting lab, this one will take its time in order to test upgraded systems that will also be used on the first crewed launch of the upgraded Soyuz spacecraft in June, which will bring three new faces to the space station. The supply craft is scheduled to arrive Saturday, April 2, at 2 p.m. EDT (1800 GMT).

Currently, the station is occupied by American astronaut Tim Kopra, British astronaut Tim Peake and Russian cosmonaut Yuri Malenchenko, all of whom have been in space for more than 100 days, as well as three crewmembers who arrived just two weeks ago on a Soyuz craft: NASA astronaut Jeff Williams and cosmonauts Alexey Ovchinin and Oleg Skripochka.

It's been a very busy time on the space station: On March 22, an Orbital ATK Cygnus supply craft, flown on United Launch Alliance's Atlas V rocket, launched to the station, carrying a record-breaking load of supplies and experiments to the station. Another Progress craft left the station yesterday to free up space for the one that just launched. Next, a commercial SpaceX Falcon 9 rocket will launch its robotic Dragon cargo craft to the station, blasting off from Cape Canaveral at 4:43 p.m. EDT (2043 GMT) on April 8.