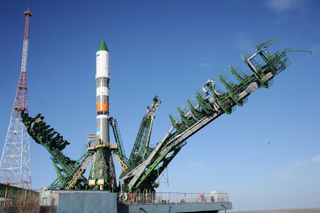 A Russian Soyuz rocket and its unmanned Progress 63P supply ship stand atop their launchpad at Baikonur Cosmodrome, Kazakhstan ahead of a March 31, 2016 launch to the International Space Station. The Progress vehicle is carrying 3 tons of supplies for the station.
(Image: © RSC Energia)

Russia's space agency, Roscosmos, is counting down to the launch of a new supply ship for the International Space Station today (March 31), and you can watch the mission blast off via a live webcast.

The unmanned Progress 63P spacecraft — crammed with 3 tons (2.7 metric tons)of supplies for the station's crew — is scheduled to launch on a Soyuz rocket at 12:23 p.m. EDT (1623 GMT) from Baikonur Cosmodrome in Kazakhstan, where it will be late evening local time at liftoff. You can watch the Progress cargo ship launch live via Space.com beginning at 12 p.m. EDT (1600 GMT), courtesy of NASA TV.

Unlike most of the recent Progress delivery missions to the space station, Progress 63P will not be making a one-day trip to the orbiting lab. Instead, it will spend two days chasing the space station before arriving on Saturday (April 2) at 2 p.m. EDT (1800 GMT), according to NASA officials. [The Space Station's Robotic Cargo Ship Fleet in Pictures]

"The two-day rendezvous for Progress is deliberately planned to enable Russian flight controllers to test new software and communications equipment for the new vehicle configuration that will be standard for future Progress and piloted Soyuz spacecraft," NASA officials wrote in a statement.

Russia's Progress spacecraft are similar in design to its crewed Soyuz space capsules. Both are three-module vehicles, with a propulsion module at the aft and an orbital module at the front. Soyuz vehicles include a crew capsule at the center, while Progress vehicles have a module with propellant to fuel space station maneuvers.

It's a superbusy time for the International Space Station. Today's launch will mark the third launch to the space station in three weeks, as well as the second cargo mission to launch in nine days.

On March 18, a Russian Soyuz spacecraft launched from Baikonur Cosmodrome to ferry American astronaut Jeff Williams and Russian cosmonauts Alexey Ovchinin and Oleg Skripochka on a one-day trip to the space station. The trio arrived at the orbiting lab about 6 hours later to join three other crewmates— NASA's Tim Kopra, Russia's Yuri Malenchenko and British astronaut Tim Peake — on board.

Then, last week, on March 22, an unmanned Orbital ATK Cygnus spacecraft launched to the space station on a delivery mission for NASA. It launched from Cape Canaveral Air Force Station in Florida and arrived on March 26.

Next week, on Friday (April 8), a commercial SpaceX Falcon 9 rocket will launch an unmanned Dragon cargo ship to the station from Cape Canaveral. That mission is currently slated to lift off at 4:43 p.m. EDT (2043 GMT) on April 8.

This story was updated at 12:13 p.m. ET to correct the docking time of Progess 63P at the International Space Station.