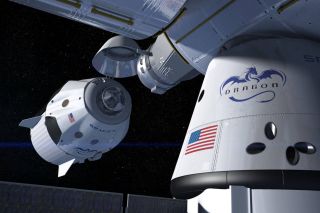 NASA has ordered a second crewed mission to the International Space Station (ISS) from SpaceX, which will provide the orbital service using its Falcon 9 rocket and Dragon capsule.

The order is the fourth and last guaranteed one that NASA will make under the Commercial Crew Transportation Capability (CCtCap) contracts the agency recently signed with SpaceX and Boeing. However, NASA has said it envisions using one or both of these companies' private space taxis for years to come. (Each company's deal allows for a potential maximum of six crewed flights.)

"The order of a second crew rotation mission from SpaceX, paired with the two ordered from Boeing, will help ensure reliable access to the station on American spacecraft and rockets," Kathy Lueders, manager of NASA's Commercial Crew Program, said in a statement. "These systems will ensure reliable U.S. crew rotation services to the station, and will serve as a lifeboat for the space station for up to seven months." [SpaceX's Manned Dragon Space Taxi for Astronauts (Photos)]

Boeing, which will use its CST-100 Starliner capsule to ferry astronauts to and from the ISS, received its two flight orders in May 2015 and December 2015, while SpaceX notched its first one in November 2015.

SpaceX is on track to launch astronauts for the first time in 2017, while Boeing should be ready in 2018, representatives of both companies have said. NASA hasn't yet announced which company will fly crews to the station first.

Since the retirement of the space shuttle in 2011, NASA astronauts have launched to, and returned from, the ISS inside Russian Soyuz spacecraft, which can accommodate three people. A standard mission aboard Dragon or Starliner, however, will fly four astronauts, as well as 220 lbs. (100 kilograms) of pressurized cargo, NASA officials said.

"With the commercial crew vehicles from Boeing and SpaceX, we will soon add a seventh crewmember to space station missions, which will significantly increase the amount of crew time to conduct research," NASA ISS chief scientist Julie Robinson said in the same statement.

"Given the number of investigations waiting for the crew to be able to complete their research, having more crewmembers will enable NASA and our partners to significantly increase the important research being done every day for the benefit of all humanity," Robinson added.

The uncrewed version of Dragon already flies to the ISS, under a separate cargo contract that SpaceX holds with NASA. SpaceX met the criteria for the second CCtCap flight after meeting developmental milestones and completing design reviews for Crew Dragon, the Falcon 9 and associated ground systems, NASA officials said.

"We appreciate the trust NASA has placed in SpaceX with the order of another crew mission and look forward to flying astronauts from American soil next year," said SpaceX President and Chief Operating Officer Gwynne Shotwell.

NASA announced the CCtCap deals with Boeing and SpaceX in September 2014. Boeing got $4.2 billion, and SpaceX received $2.6 billion.