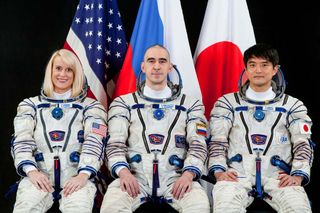 Two new astronauts and a cosmonaut will lift off toward the International Space Station tonight (July 6), beginning a two-day journey — and you can watch it live here on Space.com.

American astronaut Kate Rubins and Japanese astronaut Takuya Onishi, both first-time fliers, and Russian cosmonaut Anatoly Ivanishin, who flew on one previous mission, will lift off atop a Russian Soyuz rocket at 9:36 p.m. EDT (0136 on July 7 GMT), from the Baikonur Cosmodrome in Kazakhstan. You can watch the liftoff live here on Space.com, courtesy of NASA TV. Coverage will begin at 8:30 p.m. EDT (0030 on July 7 GMT).

The trio was initially scheduled to lift off on June 24, but that launch was rescheduled so that Roscosmos, the Russian space agency, could further test the upgraded Soyuz MS-01 spacecraft's software. During their two-day flight, the incoming crew will test the craft's upgraded systems as they orbit Earth 34 times before docking with the space station at 12:12 a.m. EDT (0412 GMT) on Saturday (July 9) opening the hatches to enter the station at about 2:50 a.m. EDT (0650 GMT), which will also be shown live on NASA TV.

Rubins is a microbiologist who spent her time before astronaut training studying dangerous viruses found in Central and West Africa. In a video interview with Space.com from Star City, Russia, she discussed the research she's looking forward to on the space station.

"I actually will be spending the majority of my day doing some kind of research or experiment," she said. "We have a range of experiments that are planned for our mission, all the way from molecular biology and cell biology to exercise and physiology experiments. We're going to be looking at dynamics of fluid, and there are even a lot of physics experiments and trying to understand the low-Earth-orbit environment of the space station."

After liftoff today, Rubins will become the 60th woman to fly in space. She and the other two crewmates will join American astronaut Jeff Williams and Russian cosmonauts Oleg Skripochka and Alexey Ovchinin aboard the orbiting lab, and the new arrivals are slated to remain for about four months.

At a crew news conference in March, during training, each of the three of the astronauts set to lift off expressed excitement and enthusiasm for working with the other two traveling with them.

"I can trust these guys more than 100 percent," Onishi said. "Anatoly … is always calm, even if we have fire and rapid depressurization in the Soyuz vehicle at the same time [during training exercises], so I like his style and he always gives good advice to Kate and me. And Kate, she has [a] totally different point of view compared to Anatoly and me, because she was a researcher. And sometimes I was pretty impressed by how she looked at experiments or our training itself."

"You expect and you hope that everything goes according to plan, but if it doesn't, these are the two guys that you want to be with you in your spacecraft," Rubins said. "So I feel pretty lucky."