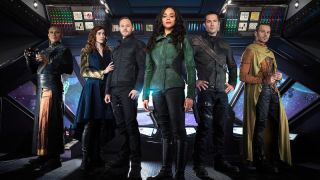 Syfy's "Killjoys" is coming back for its second season this Friday (July 1), and its action-packed plot is about to go way deeper.

The show follows a trio of space bounty hunters — called "Killjoys" — who track down criminals throughout a four-body planetary system called the Quad. Space.com talked with "Killjoys" showrunner Michelle Lovretta about what it was like to make the show and what's in store for Season 2, in which the team's bounty-hunting world will get a lot bigger.

"The point of this season, for me, is about kicking open the barn doors on a lot of those mythos and questions," Lovretta said during a press visit to the show's Toronto set in February. For instance, viewers can expect to learn a lot more about the mysterious mentor/enemy figure Khlyen, played by Rob Stewart, and his connection to the even-more-mysterious Red 17 program.

"We start the first season with this 'Bang bang, cool guns, lots of leather,' fun people who are enjoying themselves, and who aren't aware of the broader world that they're in," she said. "In Season 2…[they] have their feet on the ground, and now they don't want to be people's puppets." [Space.com Explores the Set of Syfy's 'Killjoys' (Photo Gallery)]

In terms of the three Killjoys themselves, we'll learn a lot more about Dutch, played by Hannah John-Kamen, and her background with Khlyen. We'll also get to see Dutch and the two brothers John and D'Avin Jaqobis, played by Aaron Ashmore and Luke Macfarlane, respectively, work together again but also go on solo journeys as they explore the greater world and the connections between the Company, which holds sway over the planetary system; the RAC, for whom they work; and the rebellious Scarback monks.

But not all of it will be dark. Viewers will get to see a lighter side of Dutch, as well: John-Kamen is "young, and she's full of joy, and she sings, and she dances," Lovretta said. In Season 1, the show had to establish Dutch's strength and capability, but now, "I'd like to be able to [show] my love for that character, and let her have some fun, because she deserves it," she said.

In the first season of "Killjoys," vivid characters navigated a gritty sci-fi world with serious stakes, trading quips as they navigated through science-fiction clichés but also genre-bending twists. Season 2 promises a deeper dive into that world, testing and strengthening those characters' bonds — but keeping hold of the fun and action from the first season.

"I want guns, I want a ship, and I want a sexy guy and a sexy lady — and I'm not going to apologize for that," Lovretta said. "All I can say is, my job is to give that to the people who are interested in it as well. That's the whole joy of genre."