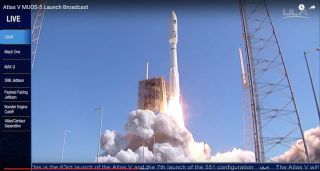 The MUOS system helps users in remote areas or places with poor communications options, and gives them the ability to stay connected to MUOS while changing location, according to Cmdr. Peter Sheehy, from the Navy's Communications Satellite Program Office, who spoke during ULA's live-launch program.

The first MUOS satellite, MUOS-1, launched in February 2012.  The MUOS-5 satellite is an "on-orbit spare" for the MUOS array, Sheehy said.

"Keeping a MUOS spare is all part of ensuring that this MUOS capability that we're delivering will be around for the next 10-plus years," he said.

ULA launched an Atlas V rocket on March 22, and carried a Cygnus cargo space craft headed to the International Space Station. During that launch, the rocket engine experienced a slight anomaly, when the first stage of the rocket engine shut off prematurely. The rocket's upper stage fired for an extra minute to compensate. ULA later said it had identified and resolved the issue. This was the first flight of an Atlas V rocket since the March launch.