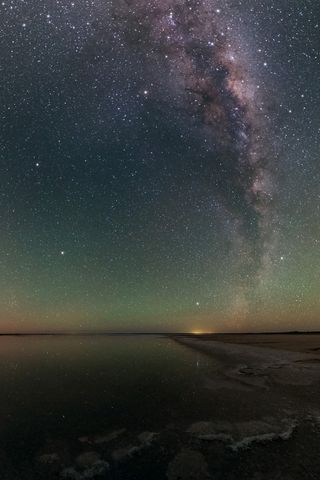 This week, three bright planets continue to vie for our attention in the evening sky: Silvery Jupiter appears in the west-southwest, while orange-yellow Mars and yellow Saturn glow brightly, low in the southeast. Stargazers see the planets move across the sky throughout the year, but even the unmoving stars behind them aren't as steadfast as they appear.

"Wandering stars" is a term usually applied to the planets. When ancient stargazers created the original constellations thousands of years ago, they called the stars that formed those constellations "fixed," because they appeared rooted in their relative positions to each other. But the planets were different, because they seemingly had the freedom to wander at will among the stars.

In fact, the stars are far from fixed; if we wait around long enough, we will see them change their positions, too. One fine example can be found high in the southern sky during the mid-to-late evening hours: the brilliant yellow-orange jewel known as Arcturus, which is the brightest star in the kite-shaped constellation of Boötes, the Herdsman. It's about 37 light-years away and is 180 times more luminous than Earth's sun. [Constellations of the Night Sky: Famous Star Patterns Explained (Gallery)]

Arcturus appears to shift its "fixed" position in the sky much more rapidly than most of the other bright stars (the sole exception is Alpha Centauri). Arcturus appears to whiz through space at a speed of some 90 miles per second in the direction of the constellation Virgo. From Earth, it appears to move toward Virgo by about 1 degree (which is about twice the apparent width of a full moon) over a time span of about 1,500 years. We are thus very fortunate to live at a time when the distance separating Arcturus and Earth's solar system is nearly at its minimum. It will continue to approach the Earth for several thousand years more, but then it will pass us as it continues to move toward Virgo, and its distance from us will then begin to steadily increase. Computations show that in approximately 500,000 years, it will probably have moved away from the Earth as far as 800 light-years and likely will have faded completely from naked-eye visibility.

A good friend of mine, George Lovi, who passed away in 1993, wrote the column "Ramblings" for "Sky & Telescope" magazine for over two decades. He cites an intriguing statement in Job 38:32:

" ... or canst thou guide Arcturus with his sons?"

It was always George's contention that this Biblical quote did not refer to Arcturus' travels across the night sky, but rather to its proper motion, which during the millennia spanning ancient times was certainly great enough for careful observers to notice. "Alas," he noted, "Here is yet another mystery from those mists of antiquity."

Although all the stars are moving rapidly helter-skelter through space at varying speeds that are measured in miles per second, their movements are not apparent to the human eye, even over a person's lifetime. However, if it were possible for someone to live for, say, 500 years, there would be some subtle differences. During the time of Columbus, for instance, the bright star Altair in Aquila, the Eagle — one of the three stars that make up the Summer Triangle — formed a much straighter line with its two dimmer flanking stars, Alshain and Tarazed.

Alpha Centauri, which I mentioned earlier, is at present the sun's nearest stellar neighbor at just 4.3 light-years away. Over the next 28,000 years, its distance from Earth will decrease to just 3.1 light years, and it will shift noticeably northward, becoming visible — albeit low in the southern sky — for midnorthern latitudes. The star will be nearly twice as bright as it appears now. And by the year A.D. 50,000, it will cross into the northern half of the sky.

But the movement of the stars through space is not the only thing that causes their positions to shift. Because the Earth is an oblate spheroid — slightly flattened at the poles and a bit thicker around the equator — the planet's axis wobbles in a fashion somewhat similar to a slowing-down top. While the tilt of Earth's axis remains the same (23.5 degrees), its wobbling motion traces a circle. Stars on or near this circle become the North Star, successively, over the course of about 25,700 years (the exact value is still not known). This time span is called the Platonic Year. [Saturn at Opposition, Jupiter's Moons and a Comet In June 2016 Skywatching]

Earth's current North Star, Polaris, remains in very nearly the same spot in the sky all year round, while the other stars circle around it. Only the apparent width of about 1.5 full moons separates Polaris from the pivot point directly north, around which the stars go daily — the spot in the sky to which the Earth's axis is pointing.

But, as discussed earlier, the wobble of the Earth's axis (called precession) causes the celestial pole to shift as the centuries go by. Polaris is actually still drawing closer to the pole and, on March 24, 2100, it will be as close to it as it will ever come, just 27.15 arc-minutes (slightly less than the moon's apparent diameter). And different stars have become the North Star at different times. The brightest star in the bowl of the Little Dipper, Kochab, was the North Star at the time of Plato, around 400 B.C. In A. D. 10,000, the first-magnitude star Deneb in Cygnus, the Swan, will be near enough to the pole to be considered as the North Star, followed 4,000 years later by the brilliant blue-white star Vega in Lyra, the Lyre.

This doesn't mean that summer will begin in December and winter will begin in June — the start of each season will still occur in the same months that they do now. But what this does mean is that when Vega is Earth's North Star in A.D. 14,000, summer constellations that are currently low or invisible from midnorthern latitudes, such as Sagittarius, Scorpius and the Southern Cross, will rise high into the sky during December and January. And the bright stars that currently adorn the winter sky, Orion, Taurus and Gemini, will be very low or partly invisible during June and July. In fact, Sirius, the brightest star, will never rise above the horizon for northerners and will be observable only from the tropics and points south of the equator.