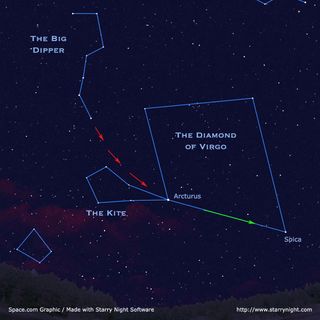 From midnorthern latitudes on spring evenings, the Big Dipper, Boötes, and Virgo can be found high in the sky from the northeast to southeast. Follow the red arrows from the Dipper's handle to arc to Arcturus and the kite-shape of Boötes, and then proceed to speed to Spica in Virgo.
(Image: © Starry Night software)

The light of Arcturus is so bright that the star was used to help open the Chicago World's Fair in 1933.

The easiest way to spot Arcturus is by following the curve of the "handle" of the Big Dipper (Ursa Major). A simple way to remember how to find the star is to recall the famous phrase "Follow the arc to Arcturus and then speed on to Spica." The latter part of that phrase refers to the bright star Spica, which is actually a binary star.

Organizers for the Chicago World's Fair in 1933 were searching for a memorable way to open their exhibit. The previous world's fair in the city had occurred 40 years earlier, in 1893. Because at the time, Arcturus was believed to be about 40 light-years away from Earth, the fair's organizers hit upon the idea of using the star's light as a part of the new exhibition and as a way to commemorate the previous Chicago World's Fair.

At 9:15 p.m. Central Time on May 27, 1933, telescopes focused the star's light on several photoelectric cells. The electric current from the star-powered photo cells was used to flip a switch that turned on the floodlights at the exhibition grounds.

Years later, measurements refined the distance to Arcturus as 37 light-years away from Earth. So, the light that was used at the Chicago's World Fair actually began its journey to Earth in 1896, not in 1893.

Today, astronomers know that Arcturus packs a lot of punch despite being only about 1.5 times the mass of the sun. To the naked eye, Arcturus appears to shine about 113 times more brightly than the sun, according to Jim Kaler, a professor emeritus at the University of Illinois at Urbana-Champaign.

Arcturus, however, has a lower temperature than the sun, which means that a lot of the red giant star's energy is radiated as heat. Once this is accounted for, Arcturus actually releases 215 times more heat than Earth's sun. Arcturus has an apparent magnitude of -0.04 and an absolute magnitude of 0.2. (The brighter the star, the lower its apparent and absolute magnitudes.) The star is in the latter stages of its life. Considered a red giant, Arcturus has stopped fusing hydrogen in its core, as the sun does, and astronomers believe it is now starting to fuse heavier elements such as carbon. [The Brightest Stars in the Sky: A Starry Countdown]

"Such stars are not expected to have magnetic activity like the sun, but very weak X-ray emission suggests that Arcturus, indeed, is magnetically active and has a hard-to-observe 'buried corona,'" wrote Kaler, referring to the shining shell of a star that is most easily visible when the star's main body is eclipsed.

Once Arcturus exhausts its helium supply, its outer layers will likely bleed off, leaving behind a white dwarf remnant.

No planets have been found surrounding this star, although science fiction has explored that subject. One early example is David Lindsay's book "A Voyage to Arcturus" (Methuen & Co. Ltd., 1920). The book's protagonist travels to Tormance, a fictional planet that orbits Arcturus.

Arcturus — either the star or a fictional planet with the same name — has also appeared in many other science fiction series, including Isaac Asimov's "Foundation" book series, the "Doctor Who" and "Star Trek" television series, and the movie "Aliens." In "The Hitchhiker's Guide to the Galaxy" universe, a famous phrase goes, "However fast the body travels, the soul travels at the speed of an Arcturan megacamel."