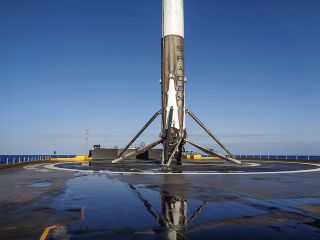 SpaceX's Falcon 9 rocket hit its target precisely on May 6, 2016, landing in the center of the deck of the drone ship "Of Course I Still Love You."
(Image: © SpaceX)

For the second time in less than a month, SpaceX has landed the first stage of its Falcon 9 rocket on a ship at sea.

The booster settled softly onto the deck of SpaceX's robotic "Of Course I Still Love You" droneship at 1:30 a.m. EDT (0530 GMT) on Friday (May 6), nine minutes after launching from Cape Canaveral Air Force Station in Florida on a successful mission to carry the Japanese communications satellite JCSAT-14 to orbit.

Chants of "USA! USA! USA!" erupted at SpaceX headquarters in Hawthorne, California as the Falcon 9 stuck its landing on the ship, which was stationed about 200 miles (320 kilometers) offshore in the Atlantic Ocean. [Photos: SpaceX Launches Satellite, Lands Rocket at Sea]

SpaceX also pulled off a landing on "Of Course I Still Love You" last month, during the successful launch of SpaceX's robotic Dragon cargo capsule toward the International Space Station. But the company wasn't expecting success on Friday morning, because the two-stage Falcon 9 had to send JCSAT-14 to a much more distant geostationary transfer orbit (GTO).

"Given this mission's GTO destination, the first stage will be subject to extreme velocities and re-entry heating, making a successful landing unlikely," SpaceX representatives wrote in a description of the JCSAT-14 mission.

In December, SpaceX brought a Falcon 9 back to Earth on terra firma at Cape Canaveral during the launch of 11 satellites for SpaceX customer Orbcomm, marking the first soft touchdown ever achieved during an orbital liftoff. (SpaceX would prefer to bring all of its rockets down on land, but boosters on some missions cannot carry enough fuel to make it all the back to their launch site, which is why the company is practicing ocean landings.)

So SpaceX now owns three Falcon 9 first stages that have come back to Earth.

These landings are part of SpaceX's effort to develop launch systems that are completely and rapidly reusable — technology that Musk has said could cut the cost of spaceflight by a factor of 100. Such price reductions could revolutionize spaceflight, perhaps making Mars colonization economically feasible, according to Musk.

Indeed, SpaceX aims to refly the first stage that landed last month — and, presumably, the one that touched down Friday morning as well. (The booster that landed in December will be displayed at SpaceX headquarters.)

SpaceX isn't the only outfit that has achieved a rocket landing. Blue Origin, the company led by Amazon.com founder Jeff Bezos, has launched and landed its New Shepard rocket three separate times, but those milestones occurred during suborbital test flights rather than orbital launches.

JCSAT-14 will be operated by SKY Perfect JSAT Corp. of Japan, which provides satellite communications to customers throughout the Asia-Pacific region using a fleet of 15 spacecraft, SpaceX representatives said.