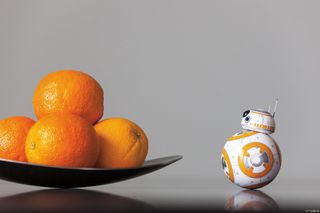 The BB-8 app-enabled droid is one of many "Star Wars" products available in the Space.com store.
(Image: © Sphero/Lucasfilm Ltd.)

Today is "Star Wars Day!" (In case you haven't heard).

This unofficial holiday celebrates the beloved space-fantasy franchise created by George Lucas, and is based entirely on a pun: "May the 4th" sounds a lot like the first part of "May the force be with you," a saying that is used frequently in that fictional universe. On the fourth day in May, most people on Earth will probably hear a friend, family member, coworker, bus driver, barista or complete stranger utter the phrase: "May the 4th be with you."

Like many of our readers, we here at Space.com are big fans of "Star Wars," (and the real-world science it inspires) which is why we're pretty pumped for all the toys, gifts and other "Star Wars" goodies that appeared online today. At the Space.com shop, you can get your very own Sphero BB8 app-enabled droid; there are also lots of action figures, including toy figures for kids and higher-quality figures for adult collectors. There's also "Star Wars"-themed jewelry, accessories and home goods — and who doesn't need TIE fighter headphones and a Han-Solo-in-carbonite backpack?

ThinkGeek, the premier place for creative geek products, released three brand-new "Star Wars" items that are just as strange and wonderful as the rest of the products on the site. The new items are: "Star Wars" Geeki Tiki cups; a Darth Vader penholder; and limited edition Swiss-made watches featuring characters from the movies, currently priced at $999.99. Plus, there's still all the other great "Star Wars" stuff ThinkGeek already offers.

Amazon.com also has a dedicated "Star Wars" section on its site today, and this might be the largest collection of franchise-related products out there. There's even a dedicated section of the Kindle store, featuring "Star Wars" books.

And if you're a big fan of Lego — like a certain managing editor we know — don't forget that a whole bundle of new "Star Wars" sets have been released recently. In honor of the newest movie addition to the franchise, "Star Wars: The Force Awakens," Lego created new sets associated with both the original trilogy and the new movie. Later this year, Lego is expected to debut multiple sets associated with the new TV show, "LEGO Star Wars: The Freemaker Adventures," which is set to debut on June 20. In addition, the new "Lego Star Wars: The Force Awakens" video game is due out on June 28.