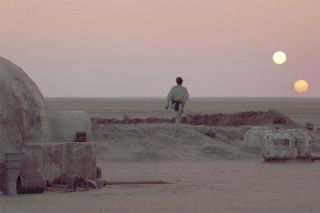 Luke Skywalker watched the double sunset on his desert home world of Tatooine in this iconic scene from "Star Wars: A New Hope."
(Image: © Lucasfilm/Disney)

When you saw "Star Wars: The Force Awakens" for the fourth time in theaters, did you see any niggling issues with gravity? Or the fact that alien worlds had breathable atmospheres? The characters were conveniently zipping from planet to planet and walking on each surface with no apparent problem.

Is this actually true for most exoplanets we know of? After all, several of the planets in our solar system aren't that friendly for a stroll. Jupiter's pressure would crush you long before you reached the surface — if there is a "surface" buried beneath the gas layers. Venus-landing spacecraft had to be reinforced against the immense surface pressure from its thick clouds. The moon and Mars — past and future destinations for astronauts — are both possible for astronauts to walk on, however, though those gravitational fields would take some getting used to.

A new paper in the journal Astrobiology (also available in preprint version on Arxiv) says the "Star Wars" problem is understandable because "filming is done on Earth, and an accurate representation of other gravity fields would be technically difficult and expensive." But is it representative of exoplanets generally? Led by the University of Valencia’s Fernando Ballesteros, the authors say reality may actually be not too far off.

ANALYSIS: Is New Star Wars Movie (or Anything Else) So New?

The authors say more than 2,000 extrasolar worlds (both confirmed and plausible) have been found, at a rate of about three per week since 2011. That's mostly thanks to NASA's prolific Kepler space telescope. While Kepler finds planets by looking at the dip in light they produce when passing across a star, other telescopes measure the gravitational wobble these planets create in the star instead. That wobble gives an estimate of how massive the planet is.

The authors classify found exoplanets into three categories: 1) masses below Earth (like Mars), 2) a transition zone with super-Earths, Neptunes and some solar system planets, 3) gas giants with masses hundreds of times that of Earth. Surprisingly, that "transition zone" has several planet analogs in our own solar system with surface gravities similar to Earth: Venus, Uranus, Neptune, and Saturn. (Note again that the gravity of Venus is similar to Earth, but its atmosphere can quickly crush unprotected spacecraft.)

But it's still unclear what the precise relationship is between planetary masses and their diameters. "For a given mass one could expect a diversity of sizes depending on the planetary composition and atmospheric size," the authors write, "and we do not even know whether all that we call super-Earths have a solid surface."

The authors add that in theory, you could have a huge rocky planet with no natural atmosphere, but that is challenged by current planetary formation models. Generally it is believed that planets assembled with bits of rock and gas attracting each other over time.

"One could in principle propose a rocky planet as big and massive as one would wish, with no atmosphere at all, but no natural process produces it. The accretion process and the competition for materials during planetary formation impose severe constraints on feasible planets," the authors wrote.

ANALYSIS: The Animals Behind the Sounds of Star Wars

But the authors note that several super-Earths that are both rocky, and that have surface gravities similar to our own planet, have already been spotted by telescopes. So perhaps the "Star Wars" strolls are not too far-fetched, they said.

"If while viewing 'The Force Awakens' the reader sees Harrison Ford walking on Takodana as if he were strolling down Hollywood Boulevard, do not be too critical," they said at the end of the paper. "After all, this may not be so wrong."