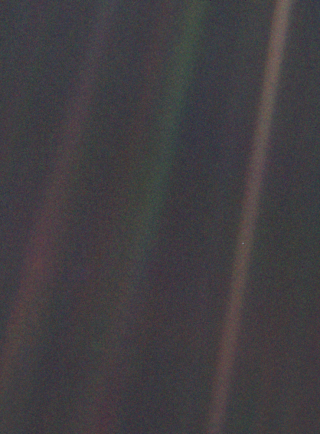 The iconic "pale blue dot" image of Earth taken by the Voyager 1 spacecraft, from a distance of 3.7 billion miles in 1990. Earth is the speck halfway down the brownish streak to the right. The streaks are artifacts, caused by the scattering of sunlight in the probe's optics.
(Image: © NASA)

In 1990, Voyager 1 captured the most distant portrait of our planet ever taken, revealing that from beyond Pluto's orbit, Earth appears as nothing more than a "pale blue dot." In a new study, researchers have tested whether Earth's color is a unique feature of life-friendly planets. If so, searching for exoplanets displaying this hue could help in singling out worlds potentially brimming with alien life.

As it turns out, Earth's delicate color can be closely mimicked by hypothetical exoplanet types that are completely uninhabitable. A broader portion of Earth's overall spectrum, however, does display a subtle signature only attributable, insofar as we know, to life. Seeking this signature from pale blue worlds in stars' habitable zones with future telescopes could be a powerful tool for identifying worlds deserving of intense further scrutiny.

"One important takeaway is that color should be used with caution because we found it's relatively easy to make lifeless planets that are pale blue in color," said lead author Joshua Krissansen-Totton, a doctoral student at the University of Washington. "With that said, I was very excited to find that Earth's spectrum has an intriguing signature that is biogenic, unique and potentially quite useful." [10 Exoplanets That Could Host Alien Life]

The study, published in The Astrophysical Journal, was funded by the NASA Astrobiology Institute's Virtual Planetary Laboratory (VPL). Paper co-author David Catling is an awardee of the agency's Habitable Worlds program.

Why so blue, Earth?

When viewed from deep space, like with Voyager 1, and reduced to a single pixel or less, Earth appears its distinctive shade for several key reasons, the study explained.

Nitrogen, the overwhelming component of Earth's atmosphere, is transparent. An atmosphere that is clear to visible light preferentially scatters short wavelength, bluer light, as opposed to longer wavelength, redder light. As a result of this so-called Rayleigh scattering, blue light appears to come from all directions, and presto: the sky looks blue, as do the oceans. The blue light scatters into space as well, and thus to external observers.

Earth's white clouds boost reflectivity at all wavelengths, diluting the intensity of the Rayleigh scattering. Some red light also mixes into Earth's color palette as it's reflected by the continental land masses. That redness bends Earth's overall color viewed from afar more toward the light blue than, say, the rich azure of Neptune, whose atmosphere's high methane levels absorb red and reflect blue.

Meanwhile, the oxygen in our air chemically reacts with many types of molecules that would otherwise form an opaque haze. Such atmospheric haze is evident in the visages of Venus, Jupiter, Saturn, and Saturn's moon Titan.

Earth's free oxygen would not exist were it not for our planet's teeming plant and microbial life, which constantly replenish it through the process of photosynthesis.

This information in hand, the University of Washington researchers then compiled the spectra of various real and theoretical exoplanets.

"We set about trying to quantify Earth's color and compared it to that of other planets that were not habitable," said Krissansen-Totton.

The study's catalog included a goodly number of theoretical worlds' spectra, from many of our solar system's planets and moons with simulated atmospheres of varying thicknesses, to gas- and ice giant exoplanets, as well as sub-Neptune-sized worlds with hydrogen-dominated or thick, water-steam envelopes.

Several types of worlds, the analysis showed, could trick astronomers into thinking they were perhaps habitable by aping Earth's special hue. The ruse could even be pulled off by planets similar to Mars, whose surface is a rusty red and plainly visible through its currently tenuous, carbon dioxide-dominated atmosphere. With a more substantial atmosphere, though, the Red Planet would look from a great distance like a Pale Blue Planet."

"Our cosmic neighbor Mars may have even been a pale blue dot earlier in its history when it had a thicker carbon dioxide atmosphere, as would icy exoplanets with thick nitrogen atmospheres," said Krissansen-Totton. "I think this is a good reason to be wary when interpreting the colors of exoplanets. There are many potential false positives, and planets that look alike at first may in fact be radically different."

On the matter of a certain spectral signature, though, no other world type displayed it except Earth. This telltale signature assumes a U-shape as it stretches from the near-ultraviolet (beyond visible light) through the visible and then into near-infrared wavelengths.

Its up-down-up shape derives from the very features that make Earth a pale blue dot in the first place: Rayleigh scattering in the bluer portion of the spectrum; some absorption in the greener portion because of the ozone in our atmosphere, which like the oxygen we breathe would not exist without life; and finally red light, again owing to continental reflectance, but also from the Earth's widespread vegetation that reflects strongly in infrared.

Krissansen-Totton is pleased that this signature could separate Earthly pretenders from the genuine article of a potentially inhabited world.

"Finding a terrestrial planet in the habitable zone with a U-shape spectrum would be incredibly exciting," he said. "The U-shape spectrum could then help distinguish between a real pale blue dot and the false positives, which don't have the same spectral shape."

On the hunt for Earthly twins

These true blue dots would be prime candidates for intensive additional study, including spectroscopy, which analyzes spectra for "fingerprints" imparted by molecules in an atmosphere.

Spectroscopy would thus confirm if a world has an oxygen-rich atmosphere along with other molecules in abundance that could only reasonably be placed there due to the chemistry of life.

Because spectroscopy requires more light in certain, narrow intervals of a spectrum compared to just gauging the broad color of a world, the latter could serve as a simple vetting for the former, helping researchers smartly allocate precious telescope time.

The pale blue dot-seeking endeavor will have to wait, because at present telescopes can only obtain the colors of young, gas giant-sized planets. Accordingly, we know what a mere handful of exoplanets look like to our eyes, such as the deep blue, scorching gas giant HD 189733b, and the magenta-hued giant, GJ 504 b.

Future telescopes, like WFIRST-AFTA and the 30-meter class of ground-based telescopes, should bring more Earth-sized, potentially livable worlds into view next decade.

In the meantime, more work remains to be done in assessing the value of exoplanet colors for clues as to habitability. No matter how detailed the theoretical basis gets, if exoplanetary history is any guide, there will be many shockers in store.

"Although we weren't able to invent a dead planet that exactly mimics Earth's color, it's possible that there are strange, uninhabitable planets out there with exotic surfaces and atmospheres that are identical in color to the Earth," said Krissansen-Totton. "Nature is weird and full of surprises."