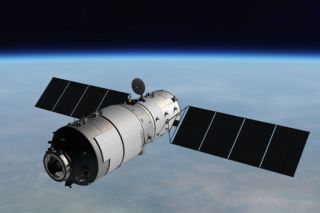 China's first space lab — Tiangong 1—has reached the end of its mission life, and its use has been "formally terminated" by officials with the China Manned Space Agency.

Tiangong 1, which launched in September 2011 with a design life of two years, was used by China for 1,630 days during its "operational orbit," CMSA officials said in a statement. The space lab was busy during its extended flight, carrying out space technology experiments and also performing Earth remote sensing activities.

Earlier this year, Chinese space officials announced that Tiangong 2 is being readied for launch in the third quarter of this year. This space lab is to latch up with the Tianzhou 1 — an automated cargo ship — in the first half of 2017.

This maiden voyage of the cargo supply vehicle is to be boosted by the still-to-be-flown Long March 7 rocket. That booster is to fly this year, lifting off from China's new Wenchang satellite launch center in south China's Hainan Province.

China also has on schedule the launch of a two-person Shenzhou 11 mission in the fourth quarter of this year to dock with Tiangong 2. According to the state-run Xinhua news agency, the Shenzhou 11 crew is now in training.

Meanwhile, the Tiangong-2, Shenzhou-11, the two Long March-2F carrier rockets to be used to lift those vehicles into space, as well as the Long March-7 rocket, and the Tianzhou-1 supply ship "are either being assembled or undergoing assembly examination."

These space missions are designed to verify key technologies and techniques for China to fabricate a 60-ton, multi-modular "medium-sized" space station around 2020.

China's Long March 5 booster is tied to the country's space station program, now on tap for its premier blastoff from the Wenchang Satellite Launch Center later this year.

Leonard David has been reporting on the space industry for more than five decades. He is former director of research for the National Commission on Space and is co-author of Buzz Aldrin's 2013 book "Mission to Mars – My Vision for Space Exploration" published by National Geographic with a new updated paperback version released in May 2015. Follow us @Spacedotcom, Facebook or Google+. Story published on Space.com.