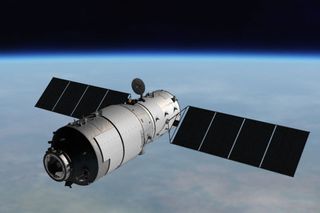 Artist’s concept of the Tiangong-1 in Earth orbit.
(Image: © CMSA)

China is set to launch its second space laboratory – Tiangong-2 – in the third quarter of this year. That launch is to be followed by the liftoff of the piloted Shenzhou-11 spacecraft.

The state-run Xinhua news agency has reported that the fourth quarter launch of Shenzhou-11 will carry two crewmembers that will dock with the Tiangong-2. Also on tap is first use of a cargo ship – Tianzhou-1 – in the first half of 2017, also headed for a link up with Tiangong-2.

The automated Tianzhou-1 ferry ship is to be rocketed into Earth orbit via a Long March 7 booster – a first test of which is slated in June, departing from China's new Wenchang satellite launch center in south China's Hainan Province. [China's Space Station Plan in Photos]

Meanwhile, the China Academy of Launch Vehicle Technology is now engaged in final tests of the Long March 5 booster, also to undergo a maiden flight this year from Wenchang.

Chinese space planners have stated a core module of its space station will be orbited in 2018 to test related technologies and to research engineering issues. The station would become fully operational in about 2022, according to government sources.

China's still operating Tiangong-1, launched in September 2011, was visited by a single uncrewed Shenzhou and two piloted Shenzhou missions between 2011 and 2013.

According to the China Radio International's English Service, the yet-to-be launched Tiangong-2 was developed on the basis of its predecessor. However, Deputy Director of the Manned Space Program Office, Wu Ping, says the 2nd space lab will perform different tasks.

"The Tiangong-2 space lab will carry out various scientific experiments and space application experiments. Astronauts will stay in Tiangong-2 for a longer period of time, performing these experiments with key technologies involved," CRI English.com reports.

Wu is reported as saying that the astronauts will stay in space for 30 days, doubling China's previous record of the longest manned space mission.

"A 30-day stay in space is an internationally recognized medium-range threshold for manned missions. We will complete the mission with the support of a manned spacecraft, so Tiangong-2 must be able to offer more storage space for daily supplies. Secondly, we have designed it to provide a more comfortable living and working environment for the astronauts."

According to CRI English.com, the chief engineer adds that Tiangong 2 will also test technologies that will eventually be applied to China's first space station.

"The still to-be-tested technologies will focus on the maintenance of the space station. We have also built a mechanical arm, which will provide automatic maintenance services. We all know that astronauts face challenges and risks when they leave the space station to perform external maintenance. We can solve that problem if we use machines to do that."

Over a dozen tasks and experiments are slated to take place on Tiangong 2 covering areas such as microgravity, fundamental physics, space material science and space life science, CRI English.com reports.

China's State Administration of Science, Technology and Industry for National Defense (SASTIND) said the robust lander has exceeded its design life by 14 months. The stationary lander’s astronomical telescope and other surveying devices it is carrying still work well, SASTIND reports.

Lastly, SASTIND points out that preparation for the country's next lunar probe mission, Chang'e-5, is under way, and it is expected to be launched around 2017.

Leonard David has been reporting on the space industry for more than five decades. He is former director of research for the National Commission on Space and is co-author of Buzz Aldrin's 2013 book "Mission to Mars – My Vision for Space Exploration" published by National Geographic with a new updated paperback version released in May 2015. Follow us @Spacedotcom, Facebook or Google+. Story published on Space.com.