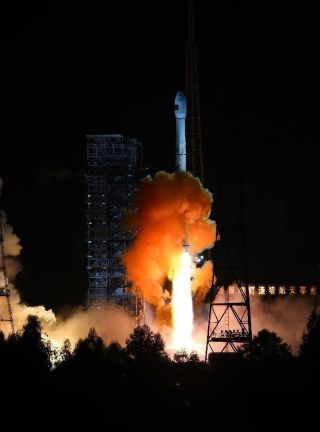 The U.S.-China Economic and Security Review Commission (USCC) recently released its 2015 annual report to Congress, and it includes an intriguing look at the China's space and counterspace programs.

The 2015 report, released in November and provided to Inside Outer Space by the USCC, provides information on and analysis of developments in the U.S.-China security dynamic, U.S.-China bilateral trade and economic relations, and China's evolving bilateral relationships with other nations.

In an introduction to Section 2, which includes the analysis on China's space program, the report notes that China "has become one of the top space powers in the world" after decades of high prioritization and steady investment. [China's Space Station Plans in Pictures]

"China's aspirations are driven by its assessment that space power enables the country's military modernization and would allow it to challenge U.S. information superiority during a conflict," the report states.

Among other purposes, the report contends, China's space and counterspace programs are designed to support its conduct as part of its antiaccess/area denial strategy to prevent or impede U.S. intervention in a potential conflict.

The U.S. Department of Defense defines "antiaccess" actions as those that are intended to slow deployment of an adversary's forces into a theater or cause them to operate at distances farther from the conflict than they would prefer.

"Area denial" actions affect maneuvers within a theater, and are intended to impede an adversary's operations within areas where friendly forces cannot or will not prevent access.

The report is rich in factoids and citations about China's aspirations in space – both for civil and military purposes, including that country's expanding deep-space exploration agenda.

As listed in the report's section focused on space, some of the conclusions are:

Note: The full report is available at:
http://origin.www.uscc.gov/sites/default/files/annual_reports/2015 Annual Report to Congress.PDF