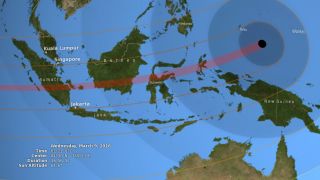 This NASA graphic depicts the 100-mile-wide (160 kilometers) path of totality for the total solar eclipse of March 8, 2016 (which will actually occur on March 9 in Southeast Asia, which lies on the other side of the international date line).
(Image: © NASA's Goddard Space Flight Center/E. Wright)

Editor's note for March 8, 10:45 pm ET: The total solar eclipse of 2016 has ended. You can see photos of the solar eclipse here. To see our full wrap up, read: Total Solar Eclipse Wows Skywatchers Across Indonesia, Pacific Region.

Today (March 8) the moon will pass in front of the sun, causing the first and only total solar eclipse of 2016. For skywatchers around the world, here's how to see the eclipse and what to expect.

Remember, do not look directly at the sun with the naked eye or a telescope. You can use special eclipse-viewing glasses or build a pinhole projector. [March 2016 Solar Eclipse - Mostly Out to Sea | Video]

The Slooh webcast, which you can also watch the total solar eclipse on Space.com courtesy of Slooh, begins at 6 p.m. EST (2300 GMT) and goes until 9 p.m. EST (0200 GMT on Wednesday). From the location in Indonesia, the eclipse will reach totality — the point at which the moon fully blocks out the sphere of the sun — starting at 7:36 p.m. EST (0037 GMT) and lasting for only about 2 minutes.

To find out when totality occurs in different parts of the world, check out our solar eclipse reference page. At the location on the Earth known as the point of greatest duration, the sun will be fully covered by the moon for just over 4 minutes, according to Geoff Gaherty of Starry Night Education. However, this spot lies over the Pacific Ocean.

Other celestial events this week

Even for skywatchers who can't personally observe the eclipse tomorrow, this week will offer some gorgeous celestial viewing events. Jupiter reaches opposition today, meaning Earth will pass directly between the mighty planet and the sun. As a result, Jupiter will rise just as the sun is setting, remain visible through the night and set when the sun rises.

Jupiter is currently the brightest object in the night sky (with the exception of the moon and the International Space Station), so it is easily observable with the naked eye. But a good pair of binoculars or a small telescope will also reveal some of the gas giant's moons. Mars and Saturn are also on display this month.

And if that isn't enough to satiate your skywatching appetite, Slooh will host another webcast on Wednesday night to track the journey of the 100-foot-wide (30.4 meters) asteroid 2013 TX68. You can also watch the webcast here on Space.com, courtesy of Slooh.

The asteroid made a close approach to Earth yesterday (March 7), at 8:42 a.m. EST (1342 GMT), coming to within 2,542,960 miles (4,092,497 kilometers) of Earth's surface, according to the Minor Planet Center, as reported on Slooh's website. However, even at its closest point, the asteroid was not visible with the naked eye, or even with a good telescope, said scientists at NASA's Jet Propulsion Laboratory.

"Slooh will live-stream the event from its flagship Canary Islands Observatory, which will be accompanied by discussions led by Slooh astronomer Eric Edelman and scientist Dr. Mark Boslough, an expert on planetary impacts and global catastrophes and frequent participant on many science TV documentaries," said the Slooh website.

Editor's note: If you safely capture an amazing photo of today's total solar eclipse and would like to share it with us and our news partners for a story or gallery, send images and comments in to Managing Editor Tariq Malik at spacephotos@space.com.