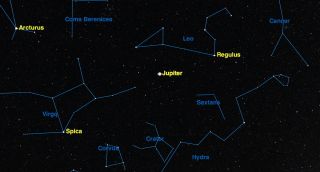 Jupiter reaches opposition to the sun on March in the midst of the constellations of spring.
(Image: © Starry Night Software)

Jupiter reaches opposition with the sun on March 8, at 6 a.m. EST. Since it is directly opposite the sun in the sky, it rises just as the sun sets, remains visible all night long, and sets as the sun rises.

Jupiter is now the brightest object in the night sky with the exception of the moon and the International Space Station. There's no difficulty telling the difference between Jupiter and the space station, because Jupiter appears stationary, while the orbiting laboratory moves across the sky rapidly, taking about 5 minutes to cross.

The largest planet in our solar system, Jupiter is more than 11 times the diameter of Earth, and is more than 300 times as massive. Although it has a solid core, Jupiter is mostly made of hydrogen and helium gas. Near the planet's core, the hydrogen exists in a metallic form (meaning it conducts electricity). The planet's rapid rotation (less than 10 hours) causes its atmosphere to be drawn out into the darker belts and brighter zones seen on its surface. [Don't Miss These 12 Must-See Skywatching Events of 2016]

Jupiter is currently located in the southern part of the constellation Leo, the lion. The planet is about a third of the way between the bright stars Regulus in Leo and Spica in Virgo. Seeing Jupiter in Leo brings back memories of my first night as a serious stargazer, when in 1957 I saw Jupiter for the first time, and identified the stars and constellations around it.

Leo makes a very distinctive pattern in the stars, and has two parts: a sickle or reversed question mark on the right and a right triangle on the left (as seen from the Northern Hemisphere). Regulus marks the dot on the bottom of the question mark, and Denebola the far angle of the triangle. Leo contains one of the finest double stars in the sky, Algieba, which is just above Regulus, and several bright galaxies, especially Messier 65 and 66, just under the right angle of the triangle.

Just to the right of Leo is the dim constellation Cancer, which is mainly notable for containing one of the nearest and brightest open clusters of stars, Praesepe, or the Beehive, No. 44 in Charles Messier's catalog of deep-sky objects. This cluster, 590 light-years distant, is actually brighter than any of the individual stars in the constellation.

To Leo's left is the huge constellation Virgo, which contains many more galaxies than it does stars. Its brightest star, Spica, represents a sheaf of wheat in the hand of the virgin, a harbinger of spring.

Above Virgo is the constellation Boötes, which contains Arcturus, the third brightest star in the sky, outshone only by Sirius and Canopus. Boötes is supposed to be a herdsman, but always looks more like a kite to me.

Observing Jupiter and its moons

If you own binoculars, try mounting them solidly and see if you can see Jupiter's four brightest moons. These were one of the first major discoveries made by Galileo in 1609 with his newly constructed telescope. He realized within a few days that these tiny spots of light were in orbit around the planet, and he used this to help prove Copernicus' model of a sun-centered system of planets.

Jupiter's moons are fascinating to watch in even the smallest telescopes. They can be seen shifting positions in less than an hour, and often pass in front of or behind Jupiter itself. When passing in front of Jupiter, they cast their shadows on the giant planet's face.

The cloud tops of Jupiter's thick atmosphere are clearly visible in amateur telescopes. Two dark cloud belts parallel its equator, with thinner cloud belts visible toward its poles. It has a famous cyclonic feature in its upper atmosphere with a distinctive salmon-pink color, known as the Great Red Spot. This has been followed by astronomers for several centuries, making it the oldest and largest storm system in the solar system, about three times the size of the Earth.