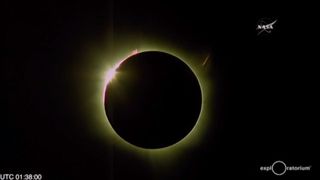 The total solar eclipse of 2016 reaches totality in this still image from a NASA webcast on March 8, 2016 from Woleai Island in Micronesia, where it was March 9 local time during the eclipse.
(Image: © NASA TV)

The skies went dark over parts of Indonesia and the Pacific Ocean region Tuesday evening (March 8) as the only total solar eclipse of 2016 took hold.

The moon briefly blotted out the sun for observers in a 90-mile-wide (145 kilometers) strip of land and sea — the "path of totality" — that stretched east across Sumatra, Borneo, Sulawesi and other islands, all the way to an empty patch of the Pacific northeast of Hawaii. You can see photos of the total solar eclipse of 2016 here from Space.com readers and live webcasts.

"We've got totality here!" Paul Cox said Tuesday evening from Sulawesi, where he had traveled to host a live eclipse webcast for the Slooh Community Observatory. [Video: NASA Explains the Total Solar Eclipse of 2016]

"I can now see [solar] prominences — they are beautiful. Wow!" Cox added. His excitement then ratcheted up even more as he witnessed the "diamond ring effect," in which the sun-moon pair resembles a piece of gigantic sky bling. "That is the most beautiful thing I've ever seen."

NASA also webcast live views of the eclipse, in collaboration with the Exploratorium science museum in San Francisco and the National Science Foundation, from Woleai atoll in the Pacific Ocean, part of the Federated States of Micronesia.

The total eclipse, which lasted just a few minutes, began at different times at different spots along the path of totality. It was first visible at 7:15 p.m. EST Tuesday (0015 GMT Wednesday, March 9) at the western end of the path (where it was actually Wednesday morning local time), and it petered out in the eastern Pacific at 10:38 p.m. EST (0338 GMT Wednesday).

The celestial spectacle also manifested as a partial solar eclipse over a much broader area, giving skywatchers in Hawaii and parts of Southeast Asia, Australia and Alaska a very good reason to look up — as long as they did so using eclipse glasses, or other types of eye protection.

Total solar eclipses occur when the moon, in its new phase, passes directly in front of the sun from an observer's perspective. The fact that they happen at all is a strange confluence of coincidences: The moon is about 400 times smaller than the sun, but lies 400 times closer to Earth than does the sun, so both objects cover roughly the same amount of sky.

Solar eclipses don't occur at every new moon, because the moon's orbit is tilted slightly with respect to Earth's path around the sun. Therefore, the satellite's shadow usually passes above or below Earth.

Two to five times per year, however, everything works out, and a solar eclipse results. But not all of these are total eclipses; sometimes, the sun-moon alignment isn't perfect, and a partial eclipse — in which the moon appears to take a bite out of Earth's star — is the result. And other times, the moon is a little too far away for total obscuration.

The moon's orbit around Earth is elliptical, and the distance between the two objects varies from about 225,000 miles (362,100 kilometers) at the closest point, called "perigee," to 252,000 miles (405,550 km) at "apogee." Total solar eclipses can only occur when the moon is near perigee, and therefore slightly bigger in the sky.

When the moon is near apogee, it can block all but the outer ring of the blazing solar disk, creating an "annular" eclipse, from the Latin for "little ring."

Indeed, the next solar eclipse — which will be visible from parts of Africa on Sept. 1 — will be the annular type.

North American skywatchers may feel left out by Tuesday's event and the upcoming African eclipse, but their time is coming. On Aug. 21, 2017, a total solar eclipse will be visible from a swath of the north-central United States stretching from Oregon to South Carolina. And most of North America will be able to catch a partial version of this "Great American Eclipse."

Editor's note: If you safely captured an amazing photo of today's total solar eclipse and would like to share it with us and our news partners for a story or gallery, send images and comments in to Managing Editor Tariq Malik at spacephotos@space.com.