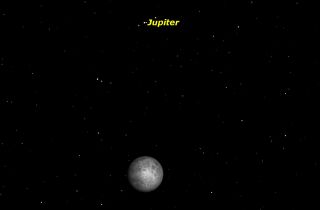 Monday/Tuesday, March 21/22, 12 midnight EDT. There is a close conjunction between the planet Jupiter and the moon right at midnight.
(Image: © Starry Night Software)

Of the three planets, Jupiter is the most dominant, particularly since it arrives at opposition to the sun on March 8 — that's when it's opposite to the sun in the sky — and shines in the sky for virtually the entire night all month long. Mars spends this month trying to call attention to itself; each day it draws about 870,000 miles (1.4 million kilometers) closer to the Earth, causing it to rapidly ramp up in brightness. But, thanks to the change to daylight saving time on March 13 (forcing us to add an hour to the clock and thus delaying the time of its rising by that much), we have to continue to wait until after midnight to see its yellow-orange light blaze into view above the east-southeast horizon. So, if you're in bed by midnight you won't see it.

Mars draws noticeably closer to another predawn planet— Saturn — during this month and on March 29 they are joined by the moon. Venus is rapidly dropping out of view, mired deep in the dawn twilight, very low near the east-southeast horizon just before sunup. And finally, Mercury is completely out of the viewing loop all through this month. [12 Must-See Skywatching Events of 2016]

Remember, you can use your clenched fist at arm's length — equal to about 10 degrees of the night sky — to measure off angular distances. The brightest stars are equal to first or zero magnitude, while the very brightest objects (Jupiter, Venus, moon and sun) are of negative magnitude. Here's a look at when to see the brightest planets in the March night sky (dependent on local weather conditions):

March 7 – Early this morning, a very thin waning crescent moon, less than 40 hours before new phase, is situated about 3 degrees to the upper left of Venus. But both objects are barely above the east-northeast horizon during dawn. Venus is still a bright precursor of the sun, but this planet's height at sunrise declines significantly in March. As viewed from latitude 40 degrees north on this morning, Venus rises only about 50 minutes before the sun and climbs to only 5 degrees up by 20 minutes before sunrise.

Mar. 8 – Jupiter arrives at opposition, meaning it’s opposite to the sun in our sky. Therefore, Jupiter rises around the time the sun sets, shines highest about midnight and sets around sunrise. Opposition is also when Jupiter is closest to the Earth for the year, appearing biggest and brightest. Look for it in the east as the blue sky darkens. How impressive is Jupiter this month? The giant world burns at magnitude minus 2.5, nearly three times as bright as Sirius, the brightest star in the sky.

Mar. 13 – Daylight saving time returns on this second Sunday in March. Except in the states of Arizona and Hawaii, and the Canadian province of Saskatchewan, clocks are to be moved forward 1 hour at 2 a.m. The mnemonic is: "Spring forward, fall back."

Mar. 16 – Early this morning, Mars will appear a mere 0.15 degrees northeast of the third magnitude double star Graffias (Beta Scorpii). Examine them in binoculars. Mars rises within a half hour of 12:15 a.m. local time during March. Of magnitude plus 0.3 at the start of the month, the planet will then appear twice as bright as its nearby "rival," the ruddy star Antares. By midmonth, Mars will match the yellow-orange star Arcturus both in color and brilliance (magnitude minus 0.1), and by month's end its brightness will have more than doubled compared to the start of the month. This brightening is due to the largest monthly relativedecrease in Mars' distance from its current apparition. Its telescopic disk grows noticeably by 26 percent in apparent size during March, but the Martian north pole is tilted only 10 degrees toward Earth, making the shrinking polar cap hard to observe even in a large telescope.

March 21 – As the sky darkens this evening, face east to see the nearly full moon with brilliant Jupiter sitting about a couple of degrees to its left.

March 23 – Mercury,the solar system's innermost planet, is invisible this month as it passes superior conjunction (behind the sun).

March 24 – That bluish star sitting about 4 degrees below or to the lower right of the moon — just one day past full phase — is Spica, in the constellation Virgo.

March 29 – In the early morning hours take note of the waning gibbous moon forming a rather wide triangle with Mars and Saturn. The two planets are about 10 degrees apart with the moon in between and standing well above them. Saturn rises around 12:45 a.m. local daylight time and will reach the southern meridian — its highest and best position for observing — soon after the start of morning twilight. Through a telescope, Saturn is spectacular! Its famous rings are tilted 26.2 degrees toward Earth.