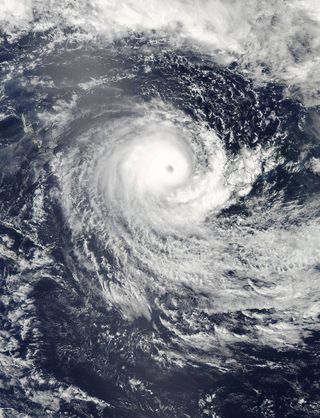 Satellite photos give a bird's-eye view of Tropical Cyclone Winston, the powerful storm that battered the Pacific Island nation of Fiji over the weekend.

NASA's Aqua spacecraft captured an image of Winston on Saturday (Feb. 20), the day the maelstrom made landfall on the island of Vitu Levi as a Category 5 storm — the most powerful type on the Saffir-Simpson Hurricane Wind Scale. (Storms such as Winston are called hurricanes in the Atlantic and Northeast Pacific regions, typhoons in the North Pacific and cyclones throughout the South Pacific and Indian Ocean.)

The Fiji Meteorological Service estimated that wind gusts near Winston’s center topped 200 mph (322 km/h), NASA officials said. The storm is the strongest on record in the Southern Hemisphere, and it has caused more than two dozen deaths. (The toll is expected to rise as rescue workers and officials make their way to outlying parts of the Fiji archipelago, which consists of more than 300 individual islands.) [Hurricanes Seen From Space: Satellite Views]

The Global Precipitation Measurement core observatory satellite, a joint mission involving NASA and the Japan Aerospace Exploration Agency (JAXA), flew directly over Winston early Saturday morning. Analysis of the spacecraft's measurements, along with other data, allowed scientists to estimate that the cyclone was dumping 6.7 inches (17 centimeters) of rain per hour in locations along the western side of its eye, NASA officials said.

On Sunday night (Feb. 21), an instrument aboard the Suomi NPP satellite, which is jointly operated by NASA and the U.S. National Oceanic and Atmospheric Administration, captured an image of Winston churning in the warm seas between Vanuatu and Fiji.

The storm was weakening at the time; wind speeds were dropping, and Winston's 23-mile-wide (37 km) eye was filled with clouds.