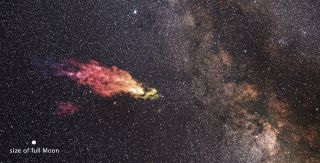 This composite image shows what Smith’s Cloud would look like in the night sky, if it were visible to human eyes. The cloud is on a course to collide with the Milky Way in about 30 million years. The cloud appears in false-color, radio wavelengths as observed by the Green Bank Telescope in West Virginia.
(Image: © Saxton/Lockman/NRAO/AUI/NSF/Mellinger)

This time, it's personal. A massive cloud ejected from the outskirts of the Milky Way galaxy about 70 million years ago is now hurtling back toward the disk at breakneck speed.

The boomeranged collection of gas, known as Smith's Cloud, was discovered in 1963, and scientists say it will collide with the Milky Way in about 30 million years. But a new study looking the composition of the cloud shows that it shares a similar chemical signature as the outer disk of the Milky Way.

Smith's Cloud is 11,000 light-years long by 2,500 light-years wide (for comparison, the Milky Way is about 100,000 light-years in diameter), and is speeding toward the Milky Way at nearly 700,000 miles per hour. While it is invisible to the naked eye, if humans could see it in the night sky, it would appear to be about 30 times the size of the full moon, according to NASA. [Stunning Photos of Our Milky Way Galaxy (Gallery)]

To determine the cloud's composition, the authors of the new research used NASA's Hubble Space Telescope. As light from background galaxies passes through the cloud, certain chemical elements inside the cloud absorb the light in specific wavelengths. The dips in brightness reveal which elements are present within the cloud. The researchers looked for sulfur, which provides a good gauge of how many elements heavier than hydrogen and helium are contained by the object.

"By measuring sulfur, you can learn how enriched in sulfur atoms the cloud is compared to the sun," lead author Andrew Fox, of the Space Telescope Science Center in Baltimore, said in a statement from the University of Notre Dame, where one of his co-authors is based.

Fox and his colleagues found that the cloud is as rich in sulfur as the outer disk of the Milky Way, a region filled with material created by stars and spread when they exploded into supernovas. This region is about 40,000 light-years from the galactic center.

If the starless cloud originated from the depths of space, as some have proposed, it would contain only hydrogen and helium. The new study reveals that upon collision, the fresh supply of gas should kick-start star formation in the galaxy. It contains enough gas to generate two million suns, according to the statement.

"We have found several massive clouds in the Milky Way halo that may serve as future fuel for star formation in its disk, but, for most of them, their origins remain a mystery," said Nicolas Lehner, of the University of Notre Dame, in the statement. "The Smith Cloud is certainly one of the best examples that shows that recycled gas is an important mechanism for the evolution of galaxies."

The research was published in the Astrophysical Journal Letters.