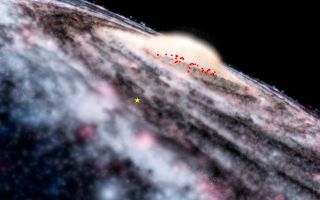 Astronomers using the VISTA telescope at ESO’s Paranal Observatory have discovered a previously unknown component of the Milky Way. By mapping out the locations of a class of stars that vary in brightness called Cepheids, a disc of young stars buried behind thick dust clouds in the central bulge has been found.This diagram shows the locations of the newly discovered Cepheids in an artist’s rendering of the Milky Way. The yellow star indicates the position of the Sun.
(Image: © ESO/Microsoft WorldWide Telescope)

A group of young stars has been caught loitering near the center of the Milky Way galaxy, a region previously thought to be dominated by a more mature population. Astronomers say the stars form a disk (previously unknown to scientists) that passes through the outer part of the dusty, peanut-shaped bulge at the galactic center.

The thick forest of dust located at the Milky Way's galactic center is a place where even the bright flame of a burning star can be nearly impossible for astronomers to see. But scientists are coming up with new ways to pull back the veil on this shadowy region, and now, new observations using the VISTA telescope have identified this previously undiscovered group of youngsters. Check out this video on Space.com to see where the stars are located relative to Earth and the sun.

The entire group of young stars has not been seen directly, but its presence is deduced by the detection of a group of very bright, very unusual stars called Cepheids. These act as though they're attached to a cosmic dimmer switch; they go through regular swings in their apparent brightness over days or months. [Stunning Photos of Our Milky Way Galaxy (Gallery)]

Cepheids are a type of variable star, meaning (just as the name suggests) they change over time. They go through regular oscillations in size and temperature, which cause each star to appear as if it were pulsing, going from a peak brightness to a peak dimness, and back again.

These pulsation periods are extremely regular, and in 1908 the astronomer Henrietta Swann Leavitt discovered that brighter Cepehids had longer pulsation periods, and dimmer Cepheids had shorter periods. With this insight, scientists were able to figure out the actual luminosity of these stars (whereas normally scientists only know how bright the star looks from Earth). That information then made it possible to use Cepheids to measure cosmic distances, making these stars an invaluable cosmic tool.

A co-author on the new paper, Daniel Majaess of Saint Mary's University in Nova Scotia, Canada, said in an email, "I couldn't help think how amazed Henrietta Leavitt would be to learn about the important and diverse role Cepheids would play in shaping our understanding of the cosmos, all of which is invariably tied to her seminal discovery of the Cepheid period-luminosity relationship. From helping define the extragalactic distance scale and expansion rate of the universe, to now-seminal constraints on the nature of the mysterious region encompassing the galactic center."

In the new study, a group of scientists report finding 655 new candidate Cepheid stars in the Milky Way. The data comes from the Vista Variables in the Vía Láctea Survey (VVV), completed by the European Southern Observatory's VISTA telescope at the Paranal Observatory in Chile between 2010 and 2014. Cepheids are brighter than most nonvariable stars — several thousand times brighter than Earth's sun, for example — which makes these stars easier to spot, said Istvan Dekany of the Pontifical Catholic University of Chile.

"This discovery is a very powerful demonstration of the recent technological advancement in infrared astronomy," Dekany, who is the lead author on the new paper, told Space.com via email. VISTA's "large field of view and superb near-infrared imaging capability allowed us to penetrate through the vast amount of interstellar dust that is blocking our view towards the inner Milky Way, and probe areas that are invisible in the optical light."

Also necessary to finding the new haul of Cepheids was the amount of time that VISTA spent watching the same area of the sky, which allowed scientists to spot the fluctuations in the Cepheids' brightness.

Among the 655 new Cepheids, 35 are so-called classical Cepheids, and all of them are less than 100 million years old. This makes them juveniles compared to a star like Earth's sun, which is 4.57 billion years old, and only about halfway through its lifetime.

"Classical Cepheids are very rare, 'one in a million' objects," Dekany wrote. Stars are typically born in large groups, so the presence of the young, classical Cepheids indicates that there are other sibling stars nearby. In this way, the scientists say they have traced this new, thin disk of young stars that crosses the galactic bulge.

Scientists previously thought of the galactic bulge as a home to mostly old stars, but finding a population of young stars there is not totally surprising, Dekany said.

"It is not completely surprising to find young objects in this region. The latest numerical models qualitatively predicted their presence there, but it is the first time that we actually observed these young objects," he said. What he does find surprising, he said, is how ubiquitous the classical Cepheids are in this region. The disk of young stars "smoothly extends to the Milky Way's core," which scientists didn't know before now, Dekany said.

"Now, the next step is to constrain the orbits of the stars there to better understand their origin (and fate) and to refine models to quantitatively match the observations," he wrote. "In this sense, our discovery is a key piece of the puzzle."