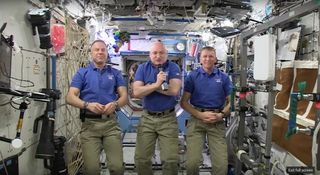 "I'd like to wish everyone down on our beautiful planet Earth a very happy New Year, and a fantastic 2016," British spaceflyer Tim Peake said in the 50-second video, which NASA released Monday (Dec. 28).

"We'd like to say what a privilege it is to serve on board the International Space Station, and how grateful we are for all the teams on the ground that support our flying in space, and the science on board," Kopra said.

The trio wrapped up the brief message with a synchronized backward somersault, and a few (unsynchronized) waves.

Kelly is about nine months into an unprecedented yearlong mission aboard the orbiting lab, during which researchers are assessing how he and cosmonaut Mikhail Kornienko respond physiologically and psychologically to long-duration spaceflight. This effort is aided by studying Kelly's identical twin brother, Mark, himself a former NASA astronaut, who stayed on the ground and serves as a sort of control.

Crewmembers typically live aboard the space station for 5.5 months at a time. The main goal of the 12-month stint of Kelly and Kornienko, NASA officials have said, is to help prepare for future crewed missions to Mars, which will require a lengthy journey through deep space.

Kopra and Peake arrived at the orbiting lab on Dec. 15, along with cosmonaut Yuri Malenchenko. The other crewmember of the station's current Expedition 46 (along with Kelly, Kornienko, Kopra, Peake and Malenchenko) is cosmonaut Sergey Volkov.

Peake is a spaceflight rookie, whereas his five fellow crewmembers have all been to orbit before — some of them a number of times. For example, the yearlong mission is Kelly's fourth spaceflight, and Malenchenko has now been to space on six different occasions.