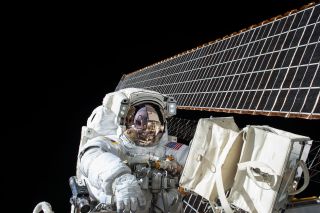 NASA astronaut Scott Kelly is seen during a spacewalk outside the International Space Station on Nov. 6, 2015. He and crewmate Tim Kopra will likely perform a surprise spacewalk on Monday, Dec. 21, to repair the station's stuck Mobile Transporter.
(Image: © NASA)

The surprise spacewalk could occur as early as Monday (Dec. 21) and would send NASA astronauts Scott Kelly and Tim Kopra outside the space station to free the outpost's Mobile Transporter railcar, which stopped moving on Wednesday (Dec. 16) while under remote control by flight controllers on Earth. The problem must be fixed before the arrival of an unmanned Russian Progress cargo ship on Dec. 23.

NASA engineers suspect the stalled railcar is the result of a stuck brake handle, according to Kenny Todd, the station's Mission Integration and Operations Manager at NASA's Mission Control center in Houston. [How the International Space Station Works (Infographic)]

In a NASA TV interview, Todd said engineers will evaluate the stuck railcar and devise a plan to free it over the weekend. The space station management team will meet on Sunday (Dec. 20) to decide whether to go ahead with the spacewalk on Monday, or push it to Tuesday (Dec. 22). NASA will televise the spacewalk live.

The spacewalk repair should take up to 3.5 hours, Todd said.

The surprise spacewalk next week will be the 191st dedicated to space station assembly or repair. It will also be the third career spacewalk for Kelly and the second for Kopra.

The space station is currently home to six crewmembers: two Americans (Kelly and Kopra), three Russians and British astronaut Tim Peake, who represents the European Space Agency. Kopra, Peake and cosmonaut Yuri Malenchenko arrived at the space station on Tuesday (Dec. 15). They joined Kelly and cosmonauts Mikhail Kornienko and Sergey Volkov, who were already aboard.

Kelly and Kornienko are in the midst of a yearlong space mission that will end in March.